The zodiac is an area of the sky that extends approximately 8° north or south (as measured in celestial latitude) of the ecliptic, the apparent path of the Sun across the celestial sphere over the course of the year. The paths of the Moon and visible planets are also within the belt of the zodiac. 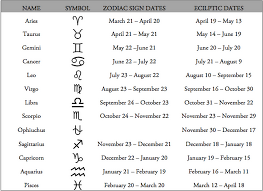 Equirectangular plot of declination vs right ascension of the modern constellations with a dotted line denoting the ecliptic. Constellations are colour-coded by family and year established.

The zodiacal signs are distinct from the constellations associated with them, not only because of their drifting apart due to the precession of equinoxes but also because the physical constellations take up varying widths of the ecliptic, so the Sun is not in each constellation for the same amount of time. Thus, Virgo takes up five times as much ecliptic longitude as Scorpius. The zodiacal signs are an abstraction from the physical constellations, and each represent exactly one twelfth of the full circle, or the longitude traversed by the Sun in about 30.4 days.

The path of the Sun passes through thirteen constellations recognized by ancient Babylonian, Greek, and Roman astronomers (including in Ptolemy's Almagest) and the modern International Astronomical Union. Because the Babylonians had a 12-month lunar calendar, they chose twelve and divided the year up evenly. The thirteenth was left out: Ophiuchus, the bottom part of which interjects between Scorpio and Sagittarius.

Occasionally this difference between the astronomical constellations and the astrological signs is mistakenly reported in the popular press as a "change" to the list of traditional signs by some astronomical body like the IAU, NASA, or the Royal Astronomical Society. This happened in a 1995 report of the BBC Nine O'Clock News and various reports in 2011 and 2016. Professional astronomers generally consider astrology a pseudoscience which has been disproven by scientific experimentation. For example, in drawing a distinction between astrology and scientific astronomy, NASA notes that "No one has shown that astrology can be used to predict the future or describe what people are like based on their birth dates."

Some "parazodiacal" constellations are also touched by the paths of the planets, leading to counts of up to 25 "constellations of the zodiac". The ancient Babylonian MUL.APIN catalog lists Orion, Perseus, Auriga, and Andromeda. Modern astronomers have noted that planets also pass through Crater, Sextans, Cetus, Pegasus, Corvus, Hydra, and Scutum; with Venus very rarely passing through Aquila, Canis Minor, Auriga, and Serpens.

Some other constellations are also mythologically associated with the zodiacal ones: Piscis Austrinus, The Southern Fish, is attached to Aquarius. In classical maps, it swallows the stream poured out of Aquarius' pitcher, but perhaps it formerly just swam in it. Aquila, The Eagle, was possibly associated with the zodiac by virtue of its main star, Altair. Hydra in the Early Bronze Age marked the celestial equator and was associated with Leo, which is shown standing on the serpent on the Dendera zodiac. Corvus is the Crow or Raven mysteriously perched on the tail of Hydra. 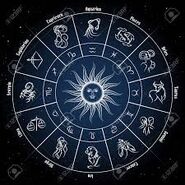 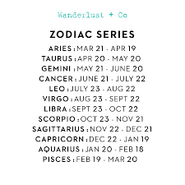 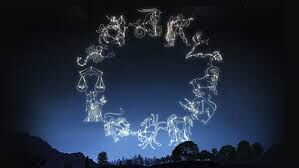 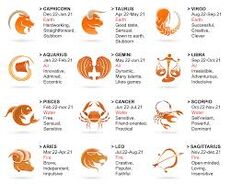