Virgo is one of the 12 zodiac constellations, first catalogued by the Greek astronomer Ptolemy in the 2nd century. It contains Spica, one of the brightest stars in the night sky. It also contains the autumn equinox point, which lies close to the star Beta Virginis. This is one of the two points in the sky (the other being in the constellation Pisces) where the celestial equator intersects with the ecliptic. Virgo is the second largest constellation in the sky. The only constellation larger in size is Hydra. 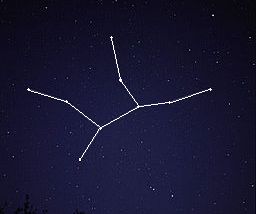