Thetis was a sea goddess, and the unofficial leader of the Nereids. Thetis was the mother of Akhilles, the great Greek warrior. Thetis had the power of prophecy as well as the power to change her shape at will, like many other sea gods are capable of doing.

During a prophecy, it was revealed that Thetis was to bear a son with greater power than his father, which both Zeus and Poseidon feared. Zeus instructed a mortal king, Peleus, to grab onto Thetis on the beach and to not let go of her no matter what form or shape she took. He did as he was told and they were married in a ceremony that was attended by all the gods, except Eris.

Because Eris was not invited, she snuck into the party and threw in a golden apple of discord that said "To The Fairest". Athena, Hera, and Aphrodite all fought over this. The story goes on to how the Trojan War was started. See Aphrodite for more information.

During the Trojan War, Thetis tried to protect her son as much as possible by pleasing as many gods as she could. She let Hephaistos and Dionysus hide in the sea and she protected Zeus' throne by calling Briares.

The Nereid Thetis holding a pitcher 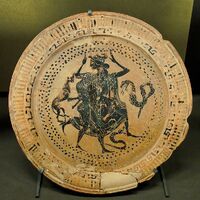 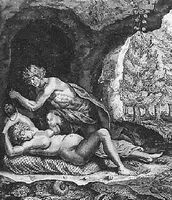 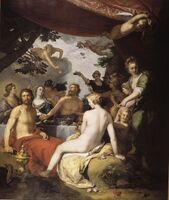 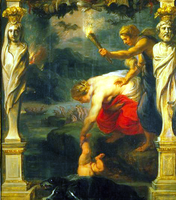 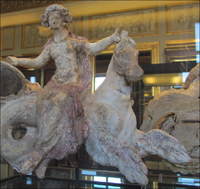 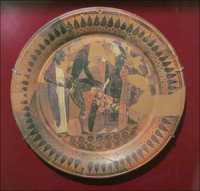 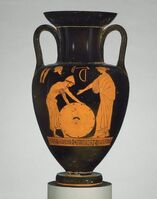 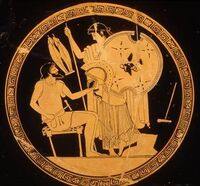