Themis (Θέμις) was the Titaness (not goddess) of justice, law and order. Themis was also a prophecy goddess who presided over some of the most ancient oracles, including Delphi. Because of this, Themis was the divine voice (themistes) who first instructed mankind in the laws of justice and morality. Examples of these rules include:

Themis was Zeus's second wife. She was represented sitting next to his throne giving him advice on the precepts of divine law and the rules of fate.

Themis was closely identified with Demeter. One reason for this is because Themis' six children presided over springtime and death, similar to what Demeter's daughter, Persephone, rules over. Themis is also identified with Gaia, the oracular voice of the earth. 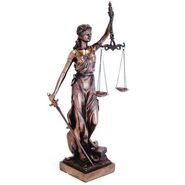