Thanatos (Ancient Greek: Θάνατος) was the Greek personification of death. Unlike the Erinyes, he was the god of peaceful death, just touching a person and then they die.

Thanatos was born to Nyx and Erebos. As well as his twin brother is Hypnos, the god of slumber. He has two sisters, the Keres sisters.

During the Trojan War , Thanatos and his brother, Hypnos, carried the dead body of Sarpedon off the battlefield to his homeland to be given a proper burial.

Sisyphus often killed guests and travelers, which violated certain laws the gods put into place. He also had children with his niece, had stolen his own brothers right to the throne, and betrayed Zeus. Because of this, Zeus ordered Thanatos to throw him into Tartarus. Thanatos was tricked by Sisyphus, however, when Sisyphus asked Thanatos to show him how the chains worked. Thanatos showed him, and Sisyphus sealed him in Tartarus. Days passed, and no human or monster would die. Ares soon found out the problem, and released Thanatos.

Alcestis and Admetus were getting married. On the night of the marriage, Admetus was drunk and forgot to give his sacrifice to Artemis. She was angered, and filled his bed with snakes, killing him. However, Apollo, who had to serve him for one year, got the Fates drunk and saved him. However, someone now had to take his place. Because nobody else stepped forward, Alcestis, being the loyal and loving wife she was, came forward and sacrificed herself. Days later, Herakles attended her funeral, and found himself to be enjoying it. Somewhat angered by this, he went down to Hades and fought Thanatos. He won, and took Alcestis with him. Thanatos was angered by this, but felt Herakles won fairly and let him live. 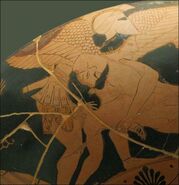 Thanatos retrieves the dead body of Sarpedon from the battlefield at Troy.