In Greek mythology, Telephus (Τήλεφος), or Tēlephos, (meaning "far-shining") was the son of Herakles and Auge, daughter of king Aleus of Tegea; and the father of Eurypylus. He was intended to be king of Tegea, but instead became the king of Mysia in Asia Minor. He was wounded by the Achaeans when they were coming to sack Troy and bring back Helen of Troy to Sparta.

Once, when Aleus was visiting Delphi, the oracle told him that the brothers of his wife would be killed by his grandson. Because of this Aleus ordered his daughter Auge to become a priestess and threatened her with a certain death if she would ever have a child. Thus Auge served the goddess Athena Alea in her temple at Tegea, which was founded by Aleus.

One day Heracles arrived at Tegea and King Aleus entertained him with wine, and eventually Heracles became intoxicated and violated Auge. She became pregnant and gave birth to a boy whom she concealed in the temple. A scarcity of grain alerted Aleus that there was a profanation of the temple, and he discovered the child.

Aleus ordered that the child was to be exposed on Mount Parthenion, where it was suckled by a deer (hence the boy's name, Telephus) and later found by herdsmen. Aleus was reluctant to kill his own daughter so he called upon King Nauplius to drown her. Nauplius sold her to slavers from Caria, who sold her again to King Teuthras of Mysia. According to another version of myth Aleus had Auge and her baby put in a chest and thrown in the sea. They arrived with the help of the goddess Athena at Mysia in Asia Minor, where the king Teuthras married Auge and adopted her son Telephus, who was later on worshiped there as the forefather of the Pergamum kingdom's house.

Telephus' companion Parthenopaeus was destined to die at the gates of Thebes, but Telephus was destined to rule foreign lands and fight his fellow Greeks before they reached Troy. The two companions went off to Asia Minor to look for land to make their kingdom. They eventually came to Mysia, where they aided King Teuthras in a war and defeated the enemy. For this the King gave Telephus the hand of his beautiful adopted daughter Auge.

Auge, who was still consecrated to the memory of Heracles, privately refused her father's decision and planned Telephus' death. She secreted a knife in the marriage bed and on the wedding night tried to kill Telephus, but Heracles separated the two with a flash of lightning and they both recognized each other as mother and son. 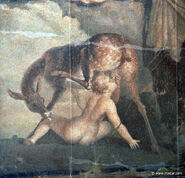 Telephus, as an infant, sucking on a deer

Telephus wounded in the thigh

Telephus (son of Hercules) cured of a potentially fatal wound