Taurus, the second astrological sign of the zodiac, is Latin for the Bull. Taurus is the first Earth sign, with the other earth signs being: Virgo, and Capricorn. TAURUS is a fixed sign. In addition to being divided into elements, the zodiac signs are divided into three modalities: cardinal, mutable, and fixed. The cardinal signs — Aries, Cancer, Libra, and Capricorn — fall at the beginning of each season. The fixed signs — Taurus, Leo, Scorpio, and Aquarius — fall in the middle of their seasons, and the mutable signs — Gemini, Virgo, Sagittarius, and Pisces — bring their seasons to a close., and the second sign on the zodiac wheel The astrological calendar, or zodiac wheel, starts with Aries, which is considered to be the baby of the zodiac. Taurus comes right after.. This means it’s the least mature of the three earth signs;

"The bull" is one of the most noticeable constellations and one of the oldest documented constellations, with descriptions of Taurus going as far back as the early Bronze Age. Taurus is most famous for its red giant star, Aldebaran, as well as a star cluster known as the Pleiades.

It is another creature from Greek mythology that is represented by Taurus, this time the Cretan Bull. As the name suggests, the Cretan Bull is primarily connected with the island of Crete, for it was sent to the island by Poseidon as a symbol that the gods were pleased with Minos, and that the son of Europa should be the next king of Crete.

Minos was supposed to sacrifice the magnificent bull, but so taken with it was Minos, that he sacrificed an inferior beast instead. Poseidon would thus cause Pasiphae, the wife of Minos to fall in love with the bull, and as a result the Minotaur was born. The Cretan Bull would ravage Crete until it was captured by the hero Heracles as he undertook his 12 Labors, as set by King Eurystheus. Heracles took it back to Tiryns, but when it was subsequently released the bull would terrorize Marathon, whence it became known as the Marathonian Bull. The Bull would eventually be killed by Theseus, with its likeness placed amongst the stars as Taurus. 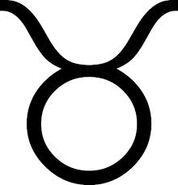