Greek Mythology Wiki
Register
Don't have an account?
Sign In
Advertisement
in: Monsters, Characters in The Odyssey, Females,
and 2 more

Sirens are mythological creatures with the head of women and the body of a bird. They live on an island in the sea luring men to them with their beautiful voices and eating them. Later versions describe them as having fish tails similar to that of mermaids

According to legend, the Sirens were young maidens who were friends of Persephone. When Persephone got kidnapped by Hades. Demeter then came out, and ask them "Where is Kore (Persephone)!" but they didn't know. So Demeter gived them wings so they could fly to search for Persephone. They did not prevent the abduction of Persephone so Demeter had punished them and turned them into half woman, half bird creatures. and said to be Daughters of Terpsikhore and Akheloios

Jason and the Argonauts[]

The hero Jason sailed past the island of the Sirens on his quest for the Golden Fleece. When his ship, the Argo sailed past the island, Jason commanded one of the Argonauts, Orpheus, a son of Apollo, renowned for his beautiful singing and lyre playing skills, to sing as loud as he could. Orpheus's voice and lyre drowned out the Sirens' voices and the Argonauts sailed past the island unharmed, except for a man named Butes, who jumped off the ship and tried to swim to shore. Aphrodite took pity on him, however and carried him to safety. The Sirens then jumped into the sea and drowned themselves for they were prophesied to die if someone hears their song and survives. However, two of the Sirens, who did not sing with the others that day, survived.

The Voyages of Odysseus[] 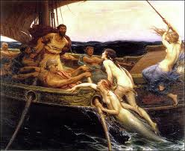