Selene (Greek: Σελήνη) was the titan goddess and personification of the moon.

Selene was the daughter of the titans, Hyperion and Theia, sister to Helios (the sun) and Eos (dawn). She was the personification of the moon, but was also associated with lunar elements such as tides, months, and even lunacy. With Zeus she is the mother of Pandeia goddess of dew.

One night when Selene was transversing the sky she spotted and fell in love with the young shepherd (or King depending on the version) Endymion. She went to Zeus asking for him to have eternal life and youth, so Zeus made him fall into an eternal sleep. Together they had 50 daughters, the Menae. These daughters represented the 50 month lunar cycle of each Olympiad.

While Selene was riding on her chariot, the god Pan saw her and lured her into the woods and won her favours with a fleece.

Selene was a powerful Titan Deity, who was chose to fade due to lack of worship.

After a while her job for driving the moon chariot was replaced with Artemis.

Selene and Endymion by Ubaldo Gandolfi 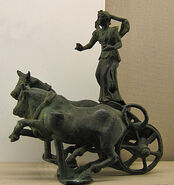 Selene in her chariot