Scorpio is the eighth astrological sign in the Zodiac, originating from the constellation of Scorpius. It spans 210°–240° ecliptic longitude. Under the tropical zodiac (most commonly used in Western astrology), the Sun transits this area on average from October 23 to November 22. Under the sidereal zodiac (most commonly used in Hindu astrology), the Sun is in Scorpio from approximately November 16 to December 15. Depending on which zodiac system one uses, an individual born under the influence of Scorpio may be called a Scorpio or a Scorpion.

Scorpio, in Greek Mythology, comes from the story of Orion. He was the son of Poseidon and Euryale. He and Artemis were hunting partners. According to one version Artemis's twin brother Apollo, was jealous of Orion, so he sent a giant scorpion which then stung and killed Orion. Zeus placed both of them in the heavens as a constellation. Scorpion is a pretty big constellation. The bright star, Antares, is the Scorpion's heart. 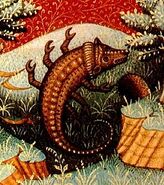 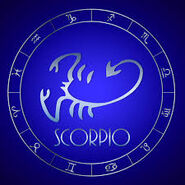