Meter Theon (Mother of the Gods)

Rhea (Gr: Ῥέα) was the Mother of the Gods (Meter Theon) and goddess of female fertility, flow, motherhood and regeneration. Her name means "flow" and "ease" As the wife of Kronos (Time), she represented the eternal flow of time and generations; as the great Mother (Meter Megale), the "flow" was menstrual blood, birth waters, and milk. She was also a goddess of comfort and ease, a blessing reflected in the common Homeric phrase "the gods who live at their ease (rhea)."

Rhea was closely identified with the Anatolian mother-goddess Kybele (Cybele). They were both depicted as matronly women, usually wearing a turret crown, and attended by lions.

Her Roman name is Ops.

Rhea was born to Gaia and Ouranos. She, along with her titan siblings, lived in a cave when they were young. Gaia offered a sickle made of flint to them to kill Ouranos. All but Kronos cowered in fear. When Kronos defeated their father, he took Rhea as a wife.

Rhea had six children. Kronos ate five because Gaea said that his son would overtake him. Rhea hid baby Zeus in a cave in Crete to be raised by nymphs. When he grew old enough, he gave Rhea a mixture of mustard, wine, and a herb that would make Kronus throw up her children. He did so, and the war was started. After ten years, Zeus ended it by slicing Kronos into millions of pieces and threw him to Tartarus. Rhea went with him, because he was her husband.

Rhea took part in the Gigantomachy defeating the Gigantes. The precise amount of involvement is unknown though she does appear on the Pergamon Altar riding a lion armed with a bow and arrow.

Rhea is generally depicted as a stately, solemn and matronly woman wearing a turret. She is also seen sitting on a throne wearing a luxurious robe with two lions accompanying her.

Rhea was a very powerful Titan Deity, Queen of the Titans and Mother to the Elder Olympian Gods. 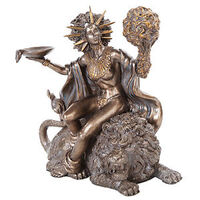 Rhea on her lion

Rhea on her throne with her lion at her side.

Rhea sitting on a throne 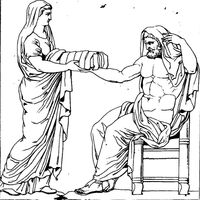 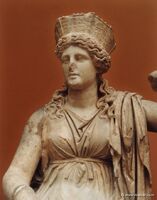 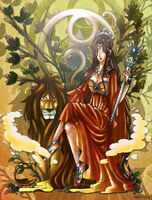 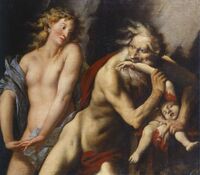 Cronus Devouring His Children by Pietro Muttoni: Rhea is shown next to him

Rhea in a lion drawn chariot

The lion is sacred to Rhea as well as her daughter, Hera. Rhea is often depicted sitting on a throne with a lion on either side. Rhea's chariot is also pulled by lions. Occasionally she is shown riding one

Rhea was often depicted wearing a crown especially when the statue was created with her on a throne.

Rhea riding a lion armed with a bow and arrow