Edit
watch 01:54
Obi-Wan Finale - The Loop
Do you like this video?
Play Sound

Aphrodite and Eros, her son, took cover in the reeds of the banks of Euphrates river after Typhon attacked the Olympians. When the grounds rustled underneath them, Aphrodite became fearful. She called for help from the nymphs and she leaped into the river with her son, Eros. Two fish swam up and carried them both to safety on their backs. Another story states that when an egg is dropped from the sky into the river Euphrates, and this was rolled to shore by two fish. Doves sat on the egg and it hatched into Aphrodite, in gratitude, put the two fish in the sky.

In another myth, the monster Perseus killed was named Pisces. Zeus was so proud of his son, he hung it in the sky. 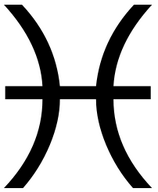