Persephone is the Greek goddess of springtime and maidenhood, and is the queen of the Underworld. She is married to Hades who is also her uncle. Her Roman name is Proserpine.

Persephone was born to Zeus and harvest-goddess, Demeter, and became the queen of the Underworld. Zeus, however, did not care for Persephone, and left them both. Demeter would then raise Persephone alone.

As soon as Persephone matured, she gained many suitors. She, however, remained a maiden. One morning, she was out picking flowers when Hades burst through the Earth, riding a golden chariot pulled by black horses. He had seen her earlier that day and had fallen in love with her. He grabbed her by the wrist and waist, took into the chariot, and down to the Underworld.

Persephone spent a year there. In this time period, during the first nine days her mother, Demeter, was distraught and searched for her. Hekate saw her one of the nine days and told Demeter. Demeter became intensely sad and stopped caring about nature and the Earth. This cause nature to die, and the first winter to occur.

Persephone longed for a friend, and hated Hades. However, he soon grew on her, and experienced true freedom (In Hades, at least). Soon, Hecate came down and befriended her, and Hades grew happy for Persephone.

Zeus then ordered Hades to return Persephone,and sent Hermes to retrieve her, but Hades sent a wonderful gift to Zeus. Persephone also ate six pomegranates, which cursed her to stay there for six months. Zeus was taken by the gift but was torn between it and nature. He, Demeter, and Hades came to an agreement: Persephone would stay one alf of the year with Hades and the other half of the year on Earth/Mount Olympus with Demeter.

Depiction of the Rape of Persephone 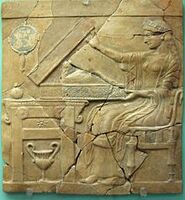 Persephone opening a cista containing the infant Adonis, on a pinax from Locri 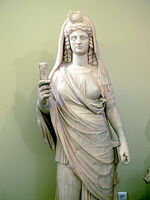 Statue of Isis-Persephone with a sistrum. Heraklion Archaeological Museum, Crete

Kore aiming her bow to the left 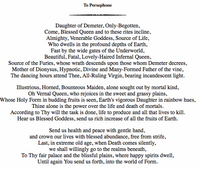