Peleus led an interesting life.  He and his brother Telamon were inadvertently responsible for the death of their half-brother Phokus.  Peleus was one of the Argonauts.  He took part in the The Kalydonian Boar Hunt where he accidentally killed the father of his first wife.  Peleus then married Themis and angered Eris who started the Trojan War which his son would die during

Akhilles (by Thetis)
Six Sons who died in infancy

Time as an Argonaut

Peleus was one of the heroes who set out to find the Golden Fleece.

Because the Kalydonian Boar Hunt was taking place in the kingdom of his father-in-law (Eurytion) Peleus too took part. Peleus inadvertently killed his father while trying to kill the boar.

Following the death of his first wife Antigone Peleus married the sea-nymph Thetis. He was able to win her with the aid of Proteus, who told Peleus how to overcome Thetis' ability to change her form. Their wedding feast was attended by many of the Olympian gods. As a wedding present, Poseidon gave Peleus two immortal horses: Balius and Xanthus. During the feast, Eris produced the Apple of Discord, which started the quarrel that led to the Judgement of Paris and eventually to the Trojan War. The marriage of Peleus and Thetis produced seven sons, six of whom died in infancy. The only surviving son was Akhilles. 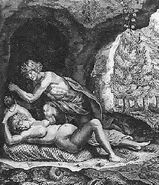 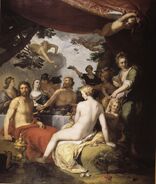 The feast of the gods at he wedding of Peleus and Thetis
Community content is available under CC-BY-SA unless otherwise noted.
Advertisement