Syrinx
Pan (Ancient Greek: Πάν), was the son of Hermes and one of three women: the nymph Dryope, the goddess Hecate, and the heroine Penelopeia . He was the rustic god of wildlife, shepherds and flocks, nature of mountain wilds and rustic music. He is mostly human in appearance but with goat horns and goat feet (satyr). He is an excellent musician and plays the pipes, also being merry and playful, frequently seen dancing with woodland nymphs. He is at home in any wild place his favorite is Arcadia, where he was born. He is always in pursuit of one of the nymphs, always being rejected because he was called ugly. His name is the basis for the word "panic". There are two differing explanations for this. The first is that he was present when Zeus defeated the Titans and claimed that it has his yelling that caused the Titans to flee. However, this seems at odds with his being Hermes' son. The second is that he created the noises in the woods at night that scared travelers.

Pan once had the audacity to compare his music with that of Apollo, and to challenge Apollo, the god of the lyre, to a trial of skill. Tmolus, the mountain-god, was chosen to umpire. Pan blew on his pipes and gave great satisfaction with his rustic melody to himself and to his faithful follower, Midas, who happened to be present. Then Apollo struck the strings of his lyre. Tmolus at once awarded the victory to Apollo, and all but Midas agreed with the judgment. Midas dissented and questioned the justice of the award. Apollo would not suffer such a depraved pair of ears any longer and turned Midas' ears into those of a donkey.

In another version of the myth, the first round of the contest was a tie, so the competitors were forced to hold a second round. In this round, Apollo demanded that they play their instruments upside-down. Apollo, playing the lyre, was unaffected. However, Pan's pipe could not be played while upside down, so Apollo won the contest.

In classical mythology, Syrinx was a nymph and a follower of Artemis, known for her chastity. Pursued by the amorous Greek god Pan, she ran to a river's edge and asked for assistance from the river nymphs. In answer, she was transformed into hollow water reeds that made a haunting sound when the god's frustrated breath blew across them. Pan cut the reeds to fashion the first set of pan pipes, which were thenceforth known as syrinx. 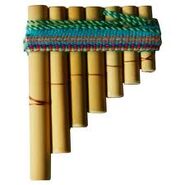