Okeanos (Ancient Greek: Ὠκεανός) was a son of Gaea and Ouranos. He was one of the eldest Titans along with Tethys, Kronos, Rhea, Theia, Hyperion, Themis, Krios, Mnemosyne, Koios, Phoibe, and Iapetos. He is the Titan of the sea and all water boundaries.

When Kronos, the youngest of the Titans, overthrew his father Ouranos, thereby becoming the ruler of the cosmos, according to Hesiod, none of the other Titans participated in the attack on Ouranos. However according to the mythographer Apollodorus, all the Titans—except Okeanos—attacked Ouranos. Proclus, in his commentary on Plato's Timaeus, quotes several lines of a poem (probably Orphic) which has an angry Okeanos brooding aloud as to whether he should join Kronos and the other Titans in the attack on Ouranos. And, according to Proclus, Okeanos did not in fact take part in the attack.

According to Hesiod's Theogony, Okeanos sent his daughter Styx, with her childrens Bia (Force), Nike (Victory), Kratos (Power) and Zelos (Envy) to fight on Zeus' side against the Titans, And in the Iliad, Hera says that during the war she was sent to Okeanos and Tethys for safekeeping.

Sometime after the war, Aeschylus' Prometheus Bound, has Okeanos visit his nephew the enchained Prometheus, who is being punished by Zeus for his theft of fire. Okeanos arrives riding a winged steed, saying that he is sympathetic to Prometheus' plight and wishes to help him if he can. But Prometheus mocks Okeanos, asking him: "How did you summon courage to quit the stream that bears your name and the rock-roofed caves you yourself have made" Okeanos advises Prometheus to humble himself before the new ruler Zeus, and so avoid making his situation any worse. But Prometheus replies: "I envy you because you have escaped blame for having dared to share with me in my troubles."

According to Pherecydes, while Herakles was travelling in Helios's golden cup, on his way to Erytheia to fetch the cattle of Geryon, Okeanos challenged Heracles by sending high waves rocking the cup, but Herakles threatened to shoot Okeanos with his bow, and Okeanos in fear stopped.

He was born to Gaia and Ouranos. 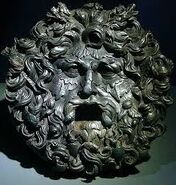 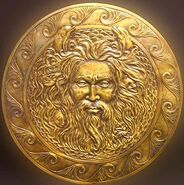 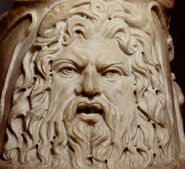 The Head of Okeanos the eldest of the Titans