Nyx (Greek: Νύξ), or Nox (in Latin) was the primordial / embodiment goddess of night and darkness.

There aren't many myths associated with Nyx, but there is one that establishes Nyx as one of the most powerful beings to exist.

Hera wanted to take the throne from her husband, Zeus, more than anything since she saw him unfit to rule. She knew that she wasn't powerful enough to take him on alone so she got help from Hypnos. With some magic, Hypnos was convinced to put Zeus into a deep sleep so Hera could work behind his back. The only problem was that Hypnos wasn't strong enough to keep the King of the Gods asleep for long. When Zeus woke up he was outraged at what the two had tried to do. He quickly forgave Hera and turned his rage to Hypnos. In fear Hypnos took refuge in a cave guarded by his mother, Nyx. When Zeus followed him to that cave he was instead met by Nyx. She demanded for Zeus to stop his chase on her son, and since even the gods are scared of the Protogenoi he agreed and rushed off.

Nyx lived in Tartarus with her daughter Hemera. During the day, Nyx would leave Tartarus (while Hemera was returning) and fly up out of the Underworld and bring Erebos together making it night time. When Nyx came back to Tartarus, Hemera left and scattered Erebus thus, revealing Aether and making it day. Later Eos the goddess of dawn came along and gave them a break. After that when Hemera arrived, Eos would leave then Nyx would leave.

Nyx was a very powerful Protogenoi Deity, so much as to incur fear in Zeus himself as he didn't want to make her angry. 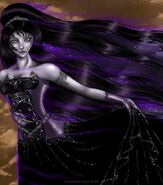 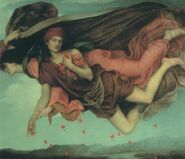 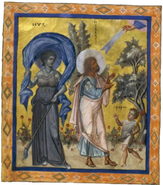 Nyx, as represented in the 10th-century Paris Psalter at the side of the Prophet Isaiah 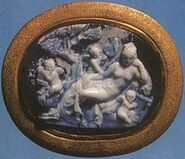