In Greek Mythology, Nemesis was the Goddess of vengeful fate, rightful retribution, or revenge as represented in her name which has a rough translation of “to give what is due” from Greek language/ dialect to English. She was later also known as Rhamnousia and Rhamnusia. Nemesis is usually seen holding a sword, but in some images she can be seen holding a balance, scales or measuring rod. She has enormous wings and travels in a chariot drawn by Griffins.

Nyx, goddess of the Night.

There are many different theories on the origins of Nemesis; one of them described her as the offspring of either Oceanus or Zeus, but according to the Greek poet Hesiod (750-650 BC), Nemesis was supposedly the child of Erebus (The god of darkness) and Nyx (The goddess of night/shadow), while others believed that Nemesis was given life from Nyx alone. In some (a moderate amount) of metaphysical lore/ mythology, Nemesis is believed to have mated with Zeus, unwillingly, giving life to two different sets of twins, the first included Helen of Troy and Clytemnestra, while the second set included The Dioscuri (helpers of mankind and held to be patrons of travelers and of sailors in particular, who invoked them to seek favorable winds) Castor and Pollux. Even though many believed that Leda was the mother of Helen, the book Bibliotheke notes that Nemesis is indeed the mother of Helen: Zeus was known for his temptation in cheating on Hera with both magical and non-magical beings. In order to avoid Zeus's advances in mating, Nemesis transformed herself into a goose, which was later impregnated by Zeus as he transformed himself into a swan. Nemesis later produced an egg (Helen), while in her goose form and gave it to a shepherd who eventually passed it onto Leda.

In Nemesis, the Roman State and the Games, author Michael B. Hornum describes the temple to Nemesis and the sanctuary at Rhamnous – in some aspects, Nemesis is called Rhamnousia after the location of her sanctuary. Statues to Nemesis have been discovered dating back to the fifth century b.c.e. in Rhamnous, and inscriptions from the fourth century b.c.e. indicate that the cult of Nemesis was led by priestesses"

In Rome she was worshiped as Invidia. 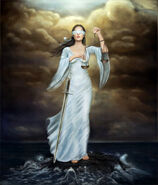 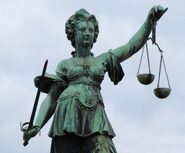