This article is a stub. You can help Greek Mythology Wiki by expanding it.

Libra is the only zodiac constellation in the sky represented by an inanimate object. The other eleven signs are represented either as an animal or mythological characters throughout history.

Other air elements are Gemini and Aquarius .

This sign of the Scales is blessed with a natural sense of right and wrong, making them very focused on justice, honesty, and fairness. As the sign of balance, Libra represents both the head and the heart -- they focus on logic and fact to ensure everything is on the up-and-up, but really thrive in the mutual feelings and closeness of one-on-one relationships. Beautiful both inside and out, Libra stands for harmony, elegance, and equality.

Libra is a Cardinal Sign that sweeps us into the fall season. Cardinal Signs are initiators, and the onset of Libra’s season begins our journey into the cooler months and the second half of the year.Libra is the third of the four Cardinal Signs (Aries Cancer Libra Capricorn) the zodiac, who all hold an elemental, initiatory energy that marks the beginning of the four seasons. Libra begins the Autumn, the source of the Scales’ affinity for taking leadership in diplomacy and social justice.

Libra is personified as the Scales of Justice that Themis holds. The scales stand for balance.

The Moon was said to be in Libra when Rome was founded and this was based on the historical passage, which state "qua condita Roma".

In astrology, a broad description of those who are born under these signs are calm, rational, and detached when dealing with situations. The sign of Libra is symbolized by the scales and is associated with the Roman deity Iustitia.

In astrology, Venus is the planetary ruler of both Libra and Taurus. Libra was thought to be the day, or diurnal home of Venus, while Venus found a nocturnal home in earthy and abundant Taurus.

In Libra, Venus has full affinity and potency in the harmonious archetype of this sign, being able to be as peaceful, diplomatic, and loving as a planetary force as she likes to be. Venus in Libra is found in the charts of elegant, graceful, and sociable people, that have a natural affinity for negotiating and expressing an artistic flair.

The Libra zodiac symbol is the Scales, named for the stellar constellation this sign corresponded to by the astrologers of the old world. The astrological symbol of the Scales is associated with the goddess Themis, who ruled over justice and the law.

She was said to be the daughter of Ouranos and Gaia, and has connections to Venus and Aphrodite in Greek and Roman myth. When Themis was placed in the heavens as a stellar constellation, she originally spanned two zodiac signs, with what we call Virgo comprising her body, and her scales of justice forming the sign ﬁ.

Libra is the keeper of balance but does that mean she is always balance and or fair in her ways. 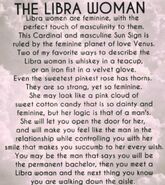 So you think you know and or can handle a Libra
Community content is available under CC-BY-SA unless otherwise noted.
Advertisement