Kronos (Ancient Greek: Κρόνoς, Kronos), also spelled Cronus, was the king of the Titans, and father of the first generation of the Olympian gods; Hestia, Demeter, Hera, Hades, Poseidon, and Zeus. He is also the father of Chiron. He is the Titan lord of the universe; his rule was known as the Golden Age. He is the Titan god of Time, Harvest, Fate, Justice and Evil. His Roman name is Saturn.

Angered at Ouranos and his actions, Gaea then created a sickle from the strongest metal. She then gathered her remaining children, the Titans, urging them to take the scythe, so as to take vengeance against Ouranos and free their brothers. The Titans, however, out of fear of their father, refused. Only Kronos was willing. He took the scythe and then convinced his older brothers (Hyperion, Koios, Krios, and Iapetos) to help him ambush their father (Okeanos, the eldest Titan, refused to help with the murder). When Ouranos came down to earth to lay with Gaia, the four of them ambushed their father, holding him down by his arms and legs. Kronos castrated Ouranos, and threw his genitals into the sea, as an insult to Okeanos for not helping with the murder. Ouranos' blood spilled acrosd the earth, and from it came forth the Gigantes, and Erinyes (the Furies). Where Kronos threw Ouranos' genitalia, sea foam started to form and Aphrodite sprung forth from it. Eventually, Gaea took a new husband, Pontus - and later Tartarus (Protogenoi) - and Kronos had become the new king and ruler of the universe.

Kronos married his sister Rhea and they had six children; Hestia, Demeter, Hera, Hades, Poseidon, and Zeus. In fear of his father's words that one of his own children would overthrow him, he then swallowed them after they were born. However, when Rhea was pregnant with her sixth child, Zeus, she went to a cave on Mount Ida in Crete where she gave birth to him in private. Rhea then took a boulder (provided to her by Gaia) which she wrapped in a blanket, which she gave to Kronos instead of Zeus. Rhea left Zeus on the island of Crete where he grew up. Fearing Kronos would hear Zeus' crying, Rhea sent Nymphs to make noise so loud, Kronos would never hear him. She had also sent a goat named Amaltheia and a few other nymphs to tend to him and they raised him deep within a cave. Once he grew to a formidable age, he was nearly ready to combat Kronos. Zeus married the goddess of prudence, Metis, for he needed her good advice. Zeus gained a position as Kronos' cubbearer; he gave Kronos a mixture of mustard and wine to drink (some sources say nectar). Kronos thought it would make him more powerful, but to his surprise, he instead vomited his children.

Enraged by their father's cannibalism, the six gods then declared war on Kronos. The three most powerful gods, Zeus, Poseidon, and Hades, went down to Tartarus and freed their uncles, the Elder Cyclopes and Hekatonkheires. In gratitude, the beings allied with the gods; the Elder Kyklopes forged the brothers powerful weapons; Zeus a lightning bolt, Poseidon a trident, and Hades a helm, which granted the wearer invisibility.

For ten long years, the gods waged a brutal war against the Titans, slowly conquering their realms, and forcing them into Mount Othrys. On the final battle, the Hekatonkheires razed Kronos' palace on Mount Othrys, and Zeus sheared Othrys' peak with his lightning bolts, toppling Kronos from his throne. The Titans were defeated and chained. Zeus then took Kronos' scythe and eviscerated his father into pieces. He cast them into the dark pit of Tartarus, along with the other Titans who supported Kronos. Atlas was condemned to hold the burden of the sky for the rest of his life.

Kronos was an extremely powerful Titan Deity who became the King of the Titans and King of the Heavens, later deposed by his son Zeus.

The festival called Saturnalia, which is named after Kronos' Roman name Saturn, was celebrated during winter and was the merriest time of the year.

Ruler of the Isle of the Blessed[]

In some myths after Zeus and the other Olympians defeated the titans, Kronos was given a happier fate and ruled over the Isles of Blessed. And in a Roman myth, he became the king of Latium after he was banished from Olympus and taught his people agriculture and the blessings of civilization. 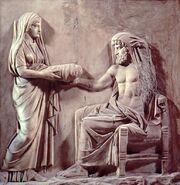 Cronus being handed a rock in Zeus's clothing

Cronus, about to devour a child. 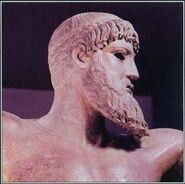 Kronos flying in a chariot led by flying Drakons 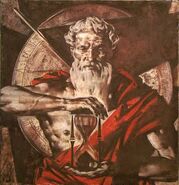 Depiction of Kronos (identifiable because of the hourglass in his hand representing time). 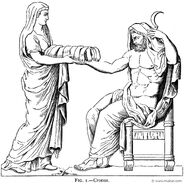 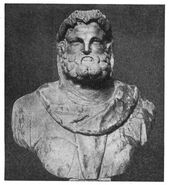 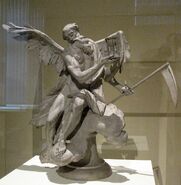 Bronze Sculpture of a young Kronos 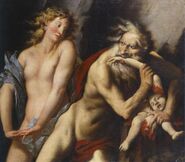