Cerberus was Hades's watchdog. The beast had three heads.

Son of Typhon and Ekhidna, said to be Hades watchdog and father of all Hellhounds who's job was that Shades didn't try to escape.

Cerberus (Gr: Κερβερος) was one of the many children of Echidna and Typhon.

When Typhon threatened the gods, Hades went into battle with Cerberus. Cerberus was afraid of his father, and did not want to fight him. Hades saw this, yet remained at his post, rather than flee with most of the other gods.

Capturing Kerberos without using any weapons or receiving any help was Herakles's final, twelfth labor he needed to complete. Herakles went into Hades with the help of Hestia, and went to the castle to which Hades resided. Herakles asked Hades if he could bring Kerberos to the surface, and Hades agreed. Kerberos charged at Herakles, but Heracles had such incredible strength, he lifted Kerberos and tossed him over his back, causing him to faint. Herakles dragged the unconscious dog to King Eurystheus. However, while outside of his palace, Kerberos awoke, which scared Eurystheus so much he jumped into a pithos. Herakles then returned Kerberos to Hades, and went back to the surface world.

Kerberos' most potent ability is its looks: It has a mane of snakes, three heads, and a tail which was a living serpent. His looks could frighten many mortals and demigods. It is also very large, and ferocious, with sharp teeth that can slice flesh. In some accounts it was said that Kerberos had a poisonous bite. The poison that drips onto the ground sprung up as a plant that is known as a wolfsbane.

◾Each of Kerberos's heads represent something; the first, birth, the second, youth, the last, old age. It also represents birth, life, and death.

◾It sometimes is described with fifty heads or a thousand heads.

◾It sometimes is described with a mane of fire.

◾Kerberos appears as a boss in several games from the Castlevania series.

◾In the God of War game series, Cerberus appears not as one character, but as an monster species. There are however two of them who appears as mini-bosses in the series: the Mole Kerberos in God of War II and the Hades Kerberos Breeder in God of War III. 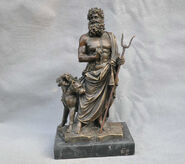 Bronze Statue of Kerberus with his master Hades 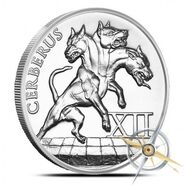 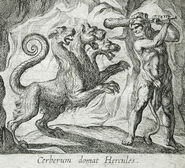