Edit
watch 01:54
Obi-Wan Finale - The Loop
Do you like this video?
Play Sound

Hyperion (Ancient Greek: Ὑπερίων, "The High One") was the Titan of light and of the east. He was one of the six sons of Ouranus and Gaia. He is also the father of the lights of the parts of the day; Helios (the Sun), Eos (the Dawn), and Selene (the Moon). Theia is sister-wife of Hyperion.

Hyperion, along with Kronos, Iapetus, Krios, and Koios conspired against their father. When Ouranos descended to the earth to lay with Gaia, Hyperion, Krios, Iapetos, and Koios waited at the corners of the world and grabbed him as he came down. Kronos Castrated him with a sickle made by their mother. Hyperion was located at the easternmost part of the world. Hyperion's colour co-ordination is said to be gold while Iapetos' is silver and Krios and Koios are both black.

He is said to have lead the Titan war once Kronos was defeated and the best titan warrior. He was eventually beaten by Poseidon and cast into Tartarus.

After the Titanomachy, Zeus sent Hyperion into the pit of Tartarus along with his brothers. In some myths, Hyperion and his brothers were eventually released from their eternal imprisonment

Hyperion and all of his brothers were seen as ancient gods that were responsible for the creation of man, each titan bestowing a quality on mankind. Hyperion was assumed to have given man the gift of sight because his name actually means "he who watches from above". Hyperion's wife, Theia, was also the Titaness of sight so it made sense that they would give mankind that gift. Another things that made the Greeks think that Hyperion and Theia gave this gift is because they believed that eyes emitted a small beam of light that allowed them to see. 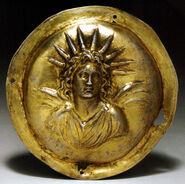 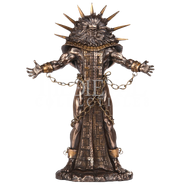 Bronze Sculpture of The Titan Hyperion