the Hearth and its Fire

Hestia (Ancient Greek: Ἑστία, hearth or fireside) was the Greek goddess that presided over the familial hearth, home, the right ordering of domesticity and family and fire, and the state. She protected the sanctity of the house, and was the patron of the State Council and Parliament. She was the eldest daughter and oldest child of Kronos and Rhea. Hestia is represented as a powerful Goddess that is represented in families and homes, and fire, and she is just as powerfu l as she is kind. Greek rumors have it, Hestia is a legend.

Hestia received the first offering at every meal in the household. In the public domain, the hearth of the prytaneum functioned as her official sanctuary. With the establishment of a new colony, flame from Hestia's public hearth in the mother city would be carried to the new settlement.

Hestia was born the first child of Kronos (Titan of Time) and Rhea (Titan of Motherhood). Kronos became so paranoid of his children overthrowing him that he swallowed them all. For years Hestia lived inside the Titan's stomach until Zeus was able to force Kronos to regurgitate his siblings. Hesita came out of Kronos' stomach last, which is why she is both the oldest and the youngest of Rhea's children.

She was also apart of the Titanomachy, aka The Great War. This is the war that established rule to the Gods and punished Kronos and his followers. Once the gods won she became an Olympian, but later gave up her seat for the god Dionysus.

Her beauty attracted the interest of Apollo and Poseidon who asked her to marry them. However, Hestia was unwilling to get married and asked Zeus to make her a virgin Goddess so that she would never be married.

Only once was Hestia's virginity ever in danger. After a feast attended by all the gods, after everyone fell asleep. Priapus, a fertility god who was the son of Aphrodite and Dionysus, made his way over to her and tried to ravish her while she was asleep. A donkey brayed just in time to awaken Hestia, who screamed when she saw Priapus about to mount her. Her screaming frightened him away and her virginity was secure once again.

Her Place on the Throne[]

Zeus had a Demigod son with the mortal princess Semele, named Dionysos. Dionysos was not like the other demigods who fought and were adventurous. He was quite different from other people. He was shunned by others, until he crushed wine grapes in such a way, it made wine. Zeus was taken aback by this, and made him immortal, then offered him a throne on Mount Olympus. However, 13 was an unlucky number, so he reconsidered. Hestia, the goddess of the hearth who, having grown weary of her quarrelsome family, was happy to give up her place. She would then tend to the sacred flame of Olympus.

Gallery of Things Sacred To Hestia[]

The Donkey is a sacred animal to Hestia

The Crane is Hestia's sacred bird 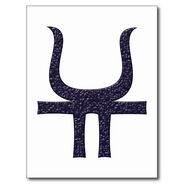 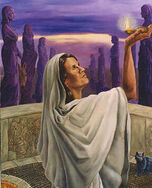 Bronze sculpture of Hestia Goddess of the Hearth 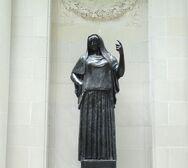 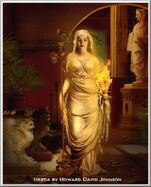 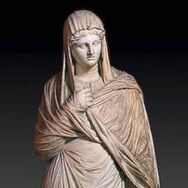