Hera (Greek: Ἥρᾱ) is the Greek goddess of women, marriage, childbirth, sky, air, queenship, and starry heaven. She is the youngest daughter of Kronos and Rhea, and the sister and final wife of Zeus, and thus the Queen of Olympus and Queen of the Gods. The cow and the peacock are sacred to her.

There is a rumor that states that it if you are blessed by Hera you do not have to worry about a thing about relationships.

Hera reigns as Zeus's wife. Praise both Hera and Zeus for blessings will rain upon you as the Greeks know since the ancient centuries have it as a secret.

Hera presides over the right ordering of marriage. The legitimate offspring of her union with Zeus are Ares (the god of war), Hebe (the goddess of youth), Eris (the goddess of discord) Eileithyia (goddess of childbirth), Enyo. Enyo, a war goddess responsible with the destruction (goddess of battle), Angelos (a chitonic goddess) and perhaps Hephaistos (god of fire and blacksmiths). It is said she gave birth to Hephaistos  without Zeus, because she was jealous of his love toward Athena. When Hephaistos was born she saw his ugliness and cast him from Olympus.

Hephaistos gained revenge against Hera for rejecting him by making her a magical throne which bound her and would not allow her to leave. At the bidding of Zeus, the other gods begged Hephaistos to let her go, but he repeatedly refused. Later Dionysos came to him and got him drunk and convinced him to release Hera from the thrown. After Hephaistos released Hera, Zeus gave him Aphrodite as his wife.

Hera was born to Kronos and Rhea. Kronos had made it a practice of eating his children once they are born. Years later, Hera's brother, Zeus had given Rhea a mustard, wine, and herb mixture to give to Kronos. He thought it would make him unstoppable, but instead he vomited up his now full grown children. As they were immortal, they were growing inside his stomach. Eventually Zeus had chopped Kronos into pieces with his own sickle, and threw him into Tartarus.

Zeus had asked her to be his queen, but she knew of his many other wives and denied his requests. Slyly, Zeus made a thunderstorm and turned into a disheveled cuckoo. Hera felt sorry for it, so she held it to keep it warm. Zeus then forced himself upon her. She married him to cover her shame.

After Hera gave birth to Hephaestus, he was so ugly and lame that she threw him off of Olympus. He landed on an island and his legs were permanently damaged. He now has an awkward walk and his home is on the island that he landed on.

When Hera found out that Zeus had impregnated Leto with a set of twins, she made all lands shun Leto so that she wouldn't be able to find a place to have her babies. However, Hera's brother, Poseidon, had recently created a piece of land that wasn't yet attached to the Earth, so it wasn't yet land. Leto went to this island and laid under a palm tree to give birth.

Few years later, Hera commanded the Giant Tityos to rape Leto. However, he failed miserably and got killed by the twin.

After Hera discovered Zeus when he had impregnated Semele, a mortal princess, she went to Semele in the guise of an old woman and asked why the baby's father wasn't with her. Semele claimed that the father was the mighty Lord of the Sky, Zeus. Hera, still disguised as the old woman, asked Semele how she could be sure that her husband really was the Lord of the Sky as so many men claimed to be him. Hera told Semele that to be sure, she should ask Zeus to see him in all his true form.

When Zeus returned, Semele made him promise on the River Styx to grant her one wish. He did so but was shocked when she asked him to show her his true form. He begged her to change her wish but she refused. He did as she pleased and she was instantly incinerated. However, Zeus rushed down to Hades and took his son from Semele.

Zeus then gave their son, Dionysos, to Hermes to take him to a valley called Nysa that was located in faraway lands to hide him from Hera. Hermes did so and left him with the Maenads where he was raised with them, as well as tigers and leopards.

Ixion tried to have an affair with Hera. Zeus molded a cloud shaped like Hera, and when he showered it with affection, Zeus sent him away on a fired wheel.

At the wedding of Thetis and Peleus, everyone was invited, except for the goddess of discord, Eris. She was angered by this and threw a golden apple of discord into the party that said "To The Fairest". Hera, Athena, and Aphrodite all took claim to this apple. Not being able to decide who it was for, they turned to Zeus, who sent them to Paris, a mortal shepherd. Each goddess offered him something but Paris took Aphrodite's offer of having Helen for his bride.

A certain women named Gerana became the Queen of the Pygmies. The Pygmy people worshipped her as a god, They honoured her greatly with prayers and sacrificial ritual. As day pass by, Gerana's arrogance grew, soon she became so arrogant. She even claim that her beauty has no match. She believed and boasted that she is even more beautiful than Athena, Artemis, Hera and Aphrodite. The 4 goddesses were enraged when they found out about this. However three of the goddesses (Athena, Artemis and Aphrodite) decided to let Hera handle the situation. Hera, therefore, turned Gerana into a crane bird and she decreed that birds who were Gerana's descendant will wage an eternal war against the Pygmies everytime they moved to Oceanus' river.

Legend has it that Zeus took the form of an eagle (or a great flame in Ovid's telling) and abducted Aegina, taking her to an island near Attica, then called Oenone; henceforth known by her name. Aegina's father Asopus chased after them; his search took him to Corinth, where Sisyphus was king. Sisyphus, having chanced to see a great bird bearing a maiden away to a nearby island, informed Asopus. Though Asopus pursued them, Zeus threw down his thunderbolts sending Asopus back to his own waters. Aegina eventually gave birth to her son Aeacus, who became king of the island.

In the story, Cydippe is the priestess of Hera. One day a grand celebration in honour of Hera was held in the town. When the mother's oxen cannot be found, the brothers (Cleobis and Biton) yoked themselves to their mother's cart and drove her the six miles to the temple. When they arrived to the temple, Cydippe begged to Hera to give her sons strength and devotion. Hera listened to her prayer and she answered Cydippe's prayer in a her own way. Hera granted the twins: death.

This story intreprets that (or Hera attempted to prove to us, that):

"Happiness" translates the ancient Greek word eudaimonia, which does not have to do with emotion but rather with the good fortune that a person has in life overall.

Hera is usually depicted as a tall and stately figure who is either crowned with a diadem or wearing a wreath, and carrying a specter. She was also said to be supremely beautiful, though her beauty is very different from that of Aphrodite's. Homer described her as "ox-eyed" and "white-armed", which meant that she had large, soft brown eyes that one could become lost in, as well as a clear, pure, and unblemished complexion that was as white as ivory. In fact, Zeus (who was a connoisseur of beautiful women) once confessed in a moment of pure passion that he considered Hera to be the most beautiful of all his lovers, and the only person who could truly inflame his sexual desires to their extremes.

Hera is a very jealous goddess. She is easily angered and can be offended easily. Her throne, chariot, and sandals are all made of gold. She gets mad and turns peoples' hair into serpents when ever they boast about their hair being more beautiful than Hera's.

In Ancient Greece, many people see her as a powerful and an immortal goddess. As the patron-goddess of woman, Hera held an absolute control over women's fertility and menstrual cycle. She can cause all woman on earth to suffer great pain during they're menstrual cycle; can cause all woman to become infertile; capable to make all woman to become pregnant at the same time (with or without sexual union); she can decide whether a mortal child is to be brought to life or not; can decide whether a pregnant woman is to give birth to ugly, weak or a strong, healthy baby according to her mood and will.

As the goddess of family, if wronged, she can create strife or discord among families, households and married couples. However, if she is not wronged, she can grant them familial happiness, love, peace, fortunes and good lucks.

People of Greece also worships her for clear skies and warm breezes. They believed that if she is angry she could curse them with a thunderstorm or a stormy weather. For example, Hera launched a deadly and destructive thunderstorm to Herakles that nearly killed him.

She can create rain at her own will or by using her cow pelt.

Hera is physically strong enough to kill two Gigantes with her own hands during the Gigantomachy which is: Phoitos and Harpolykos.

She also boxed Artemis' ear during the Trojan War and beat her up again during the Indian War of Dionysus, where Hera bruised Artemis' chest and the goddess (Artemis) fled with tears. Apollo was able to only console his sister as he was not strong enough to fight Hera on her behalf.

As an Olympian, she posseses many other typical Olympian superpowers such as; the ability to curse and bless, telepathy, eternal youth, shapeshifting and flight.

Gallery of Symbols of Hera & Things Sacred to Hera[]

Gallery of Images of Hera[] 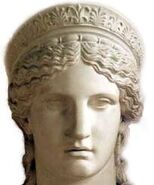 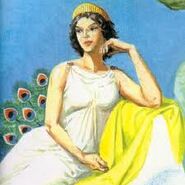 Copy of part of a Black Figure Amphora depicting part of the fightiing during the Gigantomachia (showing by name Hyperbios & Agasthenes against Zeus, the fallen giant Ephialtes as well as Harpolykos against Hera) 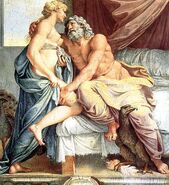 Jupiter and Juno by Annibale Carracci.

The Campana Hera, a Roman copy of a Hellenistic original, from the Louvre