Helios (Ἡλιος) was the Titan of the sun, light, fire, heat, knowledge and sight, is the and personification of the sun itself. He precedes Apollo as the charioteer of the sun.

Helios was the son of Hyperion, brother to Selene and Eos. He took the side of the Olympians in the Titan-God war.

When Apollo was born, Helios gave up his duties as ruler of the sun and gave them to Apollo. Helios was still personification of the sun, however.

Helios was a very powerful Titan Deity, who later decided to fade out due to lack of worship.

Helios would bring daylight by driving on his four-horse sun-chariot from the East to the West. Homer describes it in his Homeric Hymn as: "Driving his horses, he shines upon men and immortal gods. His eyes gaze piercingly out of his golden helmet, bright rays beam brilliantly from his temples, and the shining hair of his head graciously frames his far-away face. A rich, fine-spun garment gleams on his body and flutters in the winds, and stallions carry him." 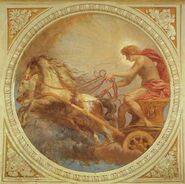 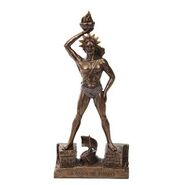 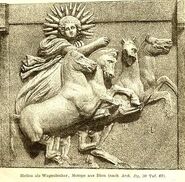