Hekate is the goddess of magic, crossroads, ghosts, the moon, necromancy, and witchcraft. She lived in the

Heaven, Earth and Sea ; witchcraft and guide to the underworld ( acting as ψυχοπομπός, psychopompós)

no regular consorts ( as virgin Goddess)

Underworld and sometimes a cave when she was on Earth. She was one of the main gods worshiped in Athenian households as a protective goddess and one who bestowed prosperity and daily blessings on the family. Hecate was once worshipped as a major goddess of the heavens, earth, and underworld. Over time she started to become less and less of such an important goddess.

Her name comes from the Ancient Greek word for will.

[...] Again, Phoebe came to the desired embrace of Coeus. [405] Then the goddess through the love of the god conceived and brought forth dark-gowned Leto, always mild, kind to men and to the deathless gods, mild from the beginning, gentlest in all Olympus. Also she bore Asteria of happy name, whom Perses once [410] led to his great house to be called his dear wife. And she conceived and bore Hecate whom Zeus the son of Cronos honored above all. He gave her splendid gifts, to have a share of the earth and the unfruitful sea. She received honor also in starry heaven, [415] and is honored exceedingly by the deathless gods. For to this day, whenever any one of men on earth offers rich sacrifices and prays for favor according to custom, he calls upon Hecate [...] [1]

[...] So, then, albeit her mother's only child,1she is honored amongst all the deathless gods. [450] And the son of Cronos made her a nurse of the young who after that day saw with their eyes the light of all-seeing Dawn. So from the beginning she is a nurse of the young, and these are her honors [...] here Hesiod is alluding to her less known role of Goddess of fertility and childbirth. ( see more here)

Hecate received powers over heaven, earth, and sea from her parents. During the Titanomachy, she sided with the Olympians and as a result, Zeus allowed her control over all domains and let her become one of the only free Titans.  She also has power over magic and witchcraft.  She can also summon the dead. Hecate has the power to cure mortals and gods alike, using that power when they wronged her.

Hecate helped Demeter in her searches for Persephone by holding torches for Demeter at night. After their reunion, Hecate became a close friend of Persephone.

Another myth explains her symbols, the black dog and a polecat. The black dog was once Queen Hecuba, who leap into the sea after the fall of Troy. Hekate turned her into a black dog to save her life and then made Hecuba her familiar. The polecat has two origins. The first being of a great witch named Gale, who was punished for her incontinence by being turned into a polecat but Hecate felt pity and kept Gale by her side.

The other myth of Gale being that when Alkmene was giving birth to Herakles, Hera told Eileithyia not to release the birth. But Alkmene's nursemaid Galinthais saw Eilithyia and yelled "The baby has arrived!" Eileithyia was shocked and lost her focus allowing the actual births to occur. When Eileithyia realized that she had been tricked she (or Hera) turned the nurse into a polecat or weasel. Hekate however took mercy on Galinthais and made her an attendant.

Hecate was usually wearing a knee length dress with hunting boots like Artemis. She usually had a burning torch in each hand and three heads. Symbolizing that she was the goddess of crossroads. Something worth mentioning is that, although usuallly portraited in dark colored cloaks, in ancient texts, Hekate is refered to as safron ( dark yellow) wearing maiden.

Hecate, in popular art, was depicted as having three heads, or three separate forms. One of a young maiden, a mother, and a Crone. Thus symbolised the cycle of life, and is still a popular symbol in Wiccan practice. In Egyptian inspired writings and art, she was seen as having three heads: one of a mare, one of a serpent and one of a dog.

Hecate was also seen as a virgin but it is also said that she had affairs with mortal men and because of her three sides only one of them was a virgin.The other two sides or faces were not maiden.

Hekate and the Moon

Being associated with the triple moon, Hekate slowly became, in Neo Paganism, associated not only to the new of dark moon as she was in Anciant Greece but also with it's other fases as well.

May that be what it is, her most common association is still with the new moon ; she's considered either daughter of Asteria ( starry sky) or Nyx ( the Night), making her correspondance with the moon much more clear.

"[Selene the Moon laments :] ‘How many times . . . have you [the witch Medea ] disorbed me with your incantations, making the night moonless so that you might practise your beloved witchcraft undisturbed.’" [N.B. Hekate gave witches with the power to draw the moon down from the sky.]

"In the deep stillness of the midnight hour . . . she [Medea] stretched her arms to the stars . . . ‘O Nox (Night) [Nyx], Mother of Mysteries, and all ye golden Astra (Stars) who with Luna (the Moon) [Selene] succeed the fires of day, and thou, divine three-formed (triceps) Hecate, who knowest all my enterprises and dost fortify the arts of magic.’"

"Out of Erebos and Chaos she [the witch] called Nox (Night) [Nyx] and the Gods of Night (Di Nocti) and poured a prayer with long-drawn wailing cries to Hecate."

"Hecate, queen of the night."

It was very common to have feasts in Hekate's honour on the new moon, with offerings being laid at crossroads. 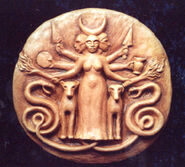 Part of a Greek vase showing Hekate setting Klytios on fire with her tourches, Zeus about to smite Porphyrion with a lightning bolt and Atherna using her spear to defeat Enkeladus