Greek Mythology Wiki
Register
Don't have an account?
Sign In
Advertisement
in: Children of Hera, Wives of Heracles, Females,
and 3 more
English

Cupbearer of the Gods,

Hebe (Ancient Greek: Ἡβη) in ancient Greek religion, is the goddess of youth or the prime of life. She is the daughter of Zeus and his wife, Hera. Hebe was the cupbearer for the gods and goddesses of Mount Olympus, serving their nectar and ambrosia until she married Herakles her successor was the divine hero Ganymede. Another title of hers for this reason is Ganymeda, meaning "Gladdening Princess". Hebe was worshipped as the goddess of forgiveness or mercy at Sicyon.

Hebe is the Goddess of Eternal Youth as well as the Keeper of the Fountain of Youth.

In some myths, she was the Cupbearer of the Gods. She was also sometimes said to be the Patron of Brides as well as the Goddess of Pardon and Forgiveness.

The most prominent myth about Hebe would be Euripides' play, Heracleidae.

In this play, Iolaus prayed to Hebe to make him young again for a day in order to fight Eurystheus. While she was reluctant to do so at first, after Themis assured her that it would be just, Hebe granted Iolaus' wish, and he enjoyed one more day of youth in his old age - he charged into battle as a strong and healthy young man, and came out victorious.

Hebe is the daughter of Zeus and his older sister, Hera, and was seen in myth as a diligent daughter performing domestic tasks that were typical of high ranking, unmarried girls in ancient Greece. In the Iliad, she did tasks around the household such as drawing baths for her brother Ares and helping Hera enter her chariot. Pindar in Nemean Ode 10 refers to her as the most beautiful of the goddesses, and being by her mother's side in Olympus forever.

One of her roles was to be the cupbearer to the gods, serving them ambrosia and nectar. In Classical sources, Hebe's departure from this role was due to her marriage to the deified hero Heracles. Despite this, in the Iliad Hebe serves all the gods at their heavenly feast, while Ganymede is wine-pourer to Zeus alone. Additionally, Cicero seems to imply that either Hebe or Ganymede, who is typically seen as her successor, could serve in the role of cupbearer at the heavenly feast. The reasoning for Hebe's dismissal was transformed into a moralizing story in the 1500s by the Church of England, where it was stated in a note in an English-Latin dictionary that Hebe fell while in attendance to the gods, causing her dress to become undone, exposing her naked body publicly. Although there is no Classical literary or artistic source for this account, the story was modified to function as a warning to women to stay modestly covered at all times, as naked women in particular were seen as shameful by the Church.

A fragment by Callimachus describes Hera holding a feast to celebrate the seventh day after her daughter Hebe's birth. The gods have a friendly argument over who will give the best gift, with Athena, Poseidon, Apollo, and Hephaestus specifically mentioned as presenting toys or, as in Apollo's case, songs. Callimachus, who composed a poem for the celebration of the seventh day after the birth of a daughter to his friend Leon, used Apollo's gift of a song as a divine prototype for his own gift.

Hebe had two children with Herakles: Alexiares and Anicetus. Although nothing is known about these deities beyond their names, there is a fragment by Callimachus that makes a reference to Eileithyia, Hebe's sister and the goddess of childbirth, attending to her while in labour.

Because Hebe was the Goddess (and sometimes the very personification) of Youth, Hebe was always portrayed by artists as a charming young girl. In most depictions, she either wore a sleeveless dress or was semi-nude. In other portrayals, she was dressed in light garments adorned with roses, on her head was a wreath of flowers, in one hand she carried the amphora of nectar, and in the other is the cup of eternal youthfulness. She is also sometimes shown with wings.

Gallery of Symbols of Hebe[] 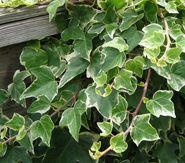 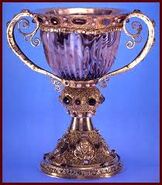 Gallery of Images of Hebe[] 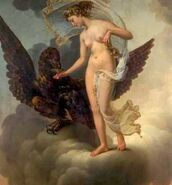 Painting of Hebe by Picque

Cup-bearer of the gods: Hebe