Euryale was one of the immortal gorgon sisters. She had brass claws, sharp fangs, and hair of living, venomous snakes.

Euryale was born, along with her two sisters, to Medusa and Stheno, deities of the sea, in caverns beneath Mount Olympus, the home of the Olympians. Euryale and her sisters were not born gorgons. Poseidon had sexually forced himself upon Medusa in the temple of Athena, which angered Athena because she was a virgin goddess. Athena turned Medusa into a gorgon along with Stheno and Euryale, who stood up for Medusa.

Possibly Euryale with her sister Medusa 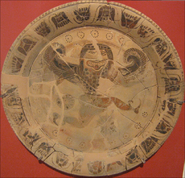