Demeter (Ancient Greek: Δημήτηρ) was the Olympian goddess of agriculture, grain, and bread, the prime sustenance of mankind. Her cult titles include Sito (σίτος: wheat) as the giver of food or corn/grain and Thesmophoros (θεσμός, thesmos: divine order, unwritten law) as a mark of the civilized existence of agricultural society.

In systematized theology, Demeter is a daughter of Kronos and Rhea and sister of Zeus by whom she became the mother of Persephone. She taught mankind the art of sowing and ploughing so they could end their nomadic existence. As such, Demeter was also the goddess of planned society. She was very popular with the rural population. As a fertility goddess she is sometimes identified with Rhea and Gaia.

Though Demeter was often described simply as a goddess of harvest, she also presided over the sanctity of marriage, the sacred law, and the cycle of life and death. She and her daughter Persephone were the central figures of the Eleusinian Mysteries that predated the Olympian pantheon.

In ancient art, Demeter was often portrayed (sitting) as a solemn woman, often wearing a wreath of braided ears of corn. Well-known is the statue made by Knidos (mid forth century BCE). Her usual symbolic attributes are the fruits of the earth and the torch, the latter presumably referring to her search for Persephone. Her sacred animals were the snake (an earth-creature) and the pig (another symbol of fertility).

Demeter was the second born child of Kronos and Rhea, after Hestia and before Hera. After her birth, Kronos devoured her and she would remain there, growing, for she was immortal and would never die. Once Zeus had grown, he fed Kronos a mixture of wine and mustard, which made him disgorge his children. Demeter was the second to last person to be thrown up. She also fought in the Titanomachy, until the gods won. She would then become an Olympian. Poseidon and Zeus both wanted to marry her, though she refused. She would, however, have affairs with them later on.

Poseidon had come one day to attempt to make her lay with him. She, in an attempt to escape him, turned herself into a Mare. Poseidon was confused at first, but then turned into a Stallion, then as result was Arion and Despoina.

She has control over crops and agriculture, and will often punish those she dislikes with famine. She is also the Goddess of the seasons, so she can change the climate and state of the earth. She is also the Goddess of Motherhood, and she can bestow a good or bad pregnancy upon mortals. When she is with Persephone, the earth is warm and ripe, but when she is away with Hades, the world is dark and bare. The story is just one of the instances where Demeter's powers can affect the earth itself. She also has various mystical power primarily to control the harvesting of plants especially, but not limited, to grain. It has been theorized that her emotions are in tune to the harvest and that they are bountiful when she is happy, and drought occurs when she is unhappy. She can also cross dimensional barriers between worlds and alter her form to appear as an elderly woman. She can invoke curses, such as when she cursed King Erysichthon in ancient times with insatiable hunger and endow mystical ability in sorcerers and mystics that know how to call upon her. She can also cross-dimensional barriers between worlds and alter her form to appear in an immaterial state to present herself to mortals. On Earth, she sometimes takes a gigantic physical stature to appear intimidating to mortals. Her powers to control the weather are not as proficient as that of Zeus or Poseidon; she can cause rain to fall, but she cannot create storms or thunder showers. Demeter's physical appearance is somewhat affected by the harvest. Under the most prosperous time of the year, she appears as a beautiful goddess with all her godly powers of eternal youth and immortality very evident. During the fall and winter, she can take the form of an older woman, but one still in command of her full power. In the spring and summer, she returns to her true condition. Likewise, when she visits areas suffering by drought or blight or inflicted by pollutants, her visage is likewise affected. By channeling powerful primal energies from Gaea, she can restore or resuscitate conditions affecting the fertility of the earth

As the goddess of agriculture, she has divine authority and absolute control over plants.  She can also grant fertility to the earth, allowing plants to grow where they could not grow before. Also, she aids plants in growing simply by being near them. 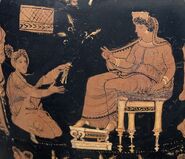 Demeter, enthroned and extending her hand in a benediction toward the kneeling Metaneira, who offers the triune wheat (c. 340 BC)

Demeter, holding her scepter in her upraised left hand, and a torch in her left hand, lunging to the right 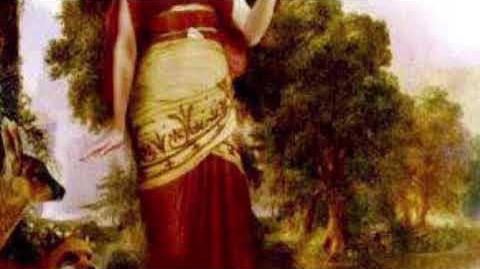