Aphrodite, Otrera (mother of the Amazons)

Ares (Ancient Greek: Αρης, literally meaning "battle") was the god of chaotic war, bloodshed, violence, and strife. In Greek literature, he often represents the physical or violent and untamed aspect of war, in contrast to his half-sister the armored Athena, whose functions as a goddess of intelligence include military strategy and generalship. He is also often called the God of Courage, though Homer's Iliad depicts him as running away when he is injured by Diomedes and Athena.

Unlike his sister Athena who represents strategy and civility of war, Ares represents all wars brutal aspects. As such he is ruthless, blood thirsty, vengeful, arrogant, brutal, cruel and ferocious in battle. Always willing to go to war and fight regardless of a reason.

Despite this he is shown to be beaten a lot by other supernatural beings in several myths. As well as running to his parents Zeus and Hera when injured.

Also despite bing disliked by her due to his savage nature Ares still cares about his mother Hera and helped Hermes persuade Hephaistos to release her. He also has affection for Aphrodite, with whom he fathered several children with.

There was once a pair of giants called the Aloadae. They were twins and they believed that they were better than the gods. But each brother loved one goddess, Artemis and Hera. The Aloadae built a mountain as high as Mount Olympus and began to attack the Olympians. Then they decided that this was not working so they came over to Olympus. They locked Ares in a bronze jar and there he stayed for 13 months only to find that the other Olympians had found a way to trick the twins into killing each other. Hermes later freed him from the jar after 13 months.

Ares is the Greek god of war, battlelust, and manly courage. He is very ferocious and violent. Many people fear him. 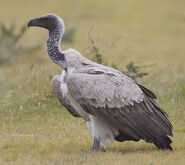 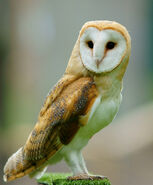 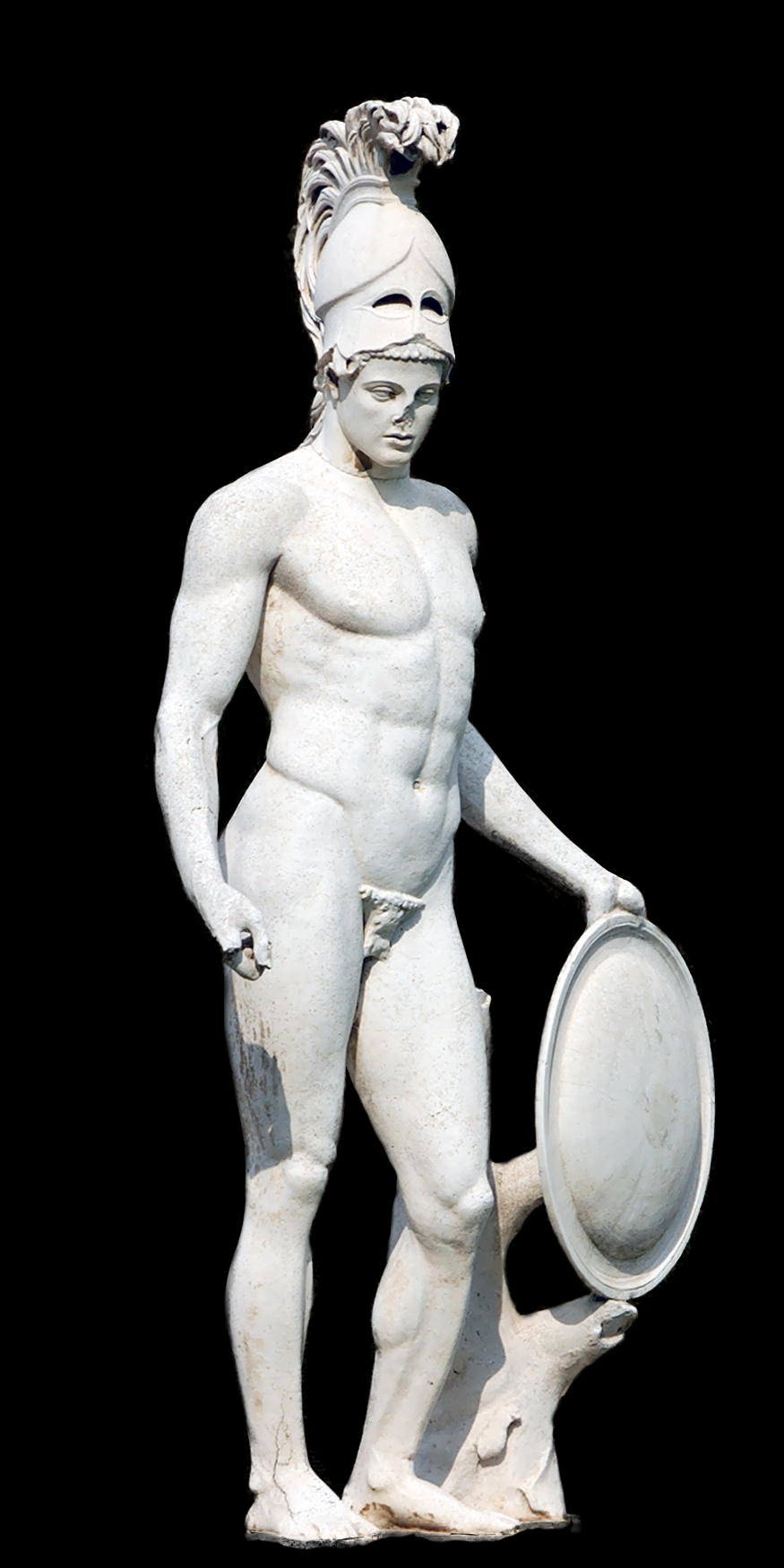 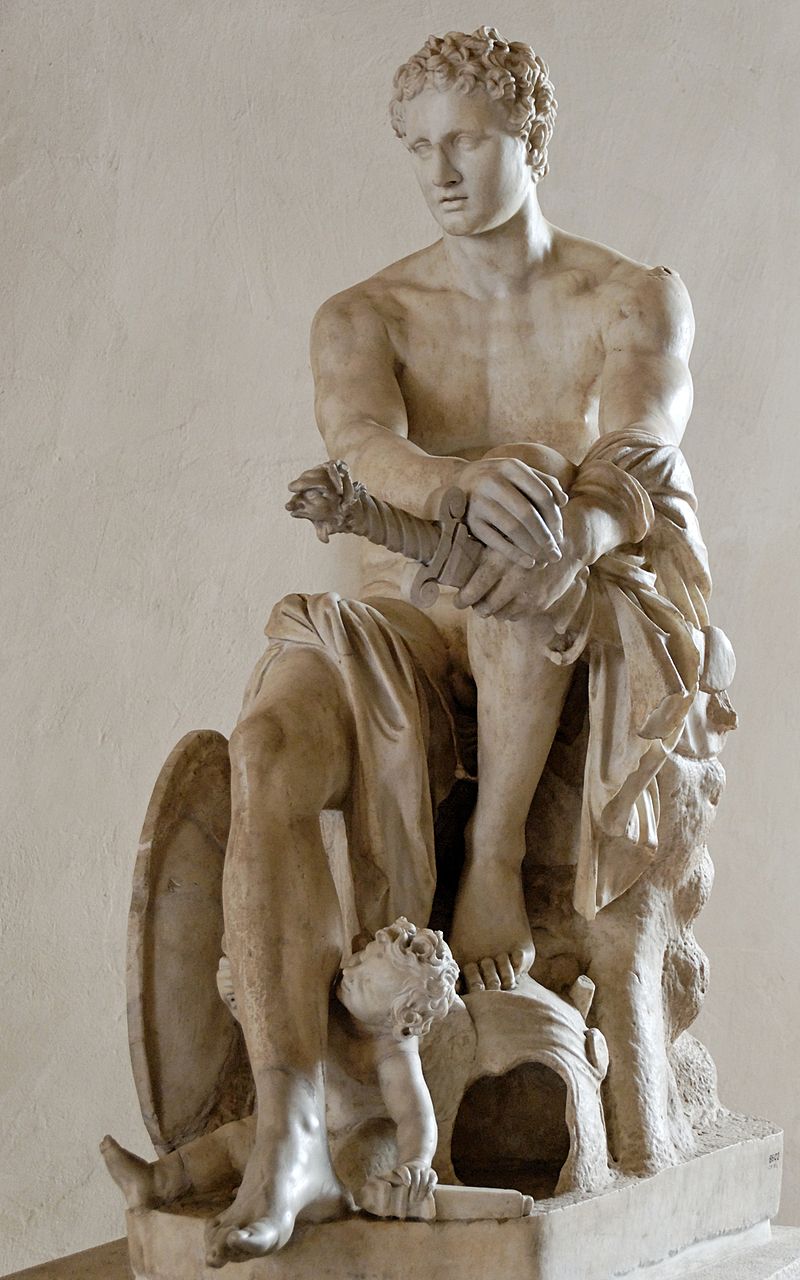 The Ludovisi Ares, Roman version of a Greek original c. 320 BC, with 17th-century restorations by Bernini 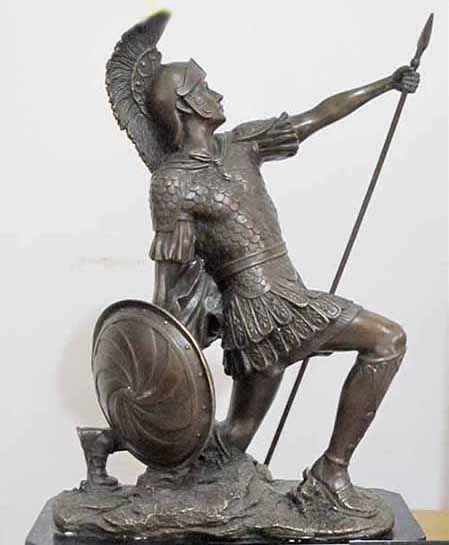 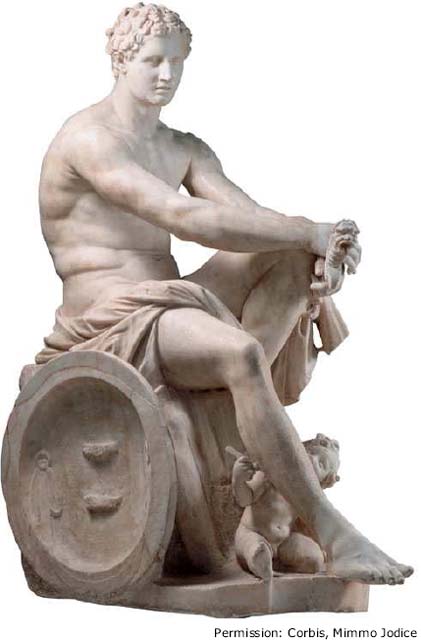 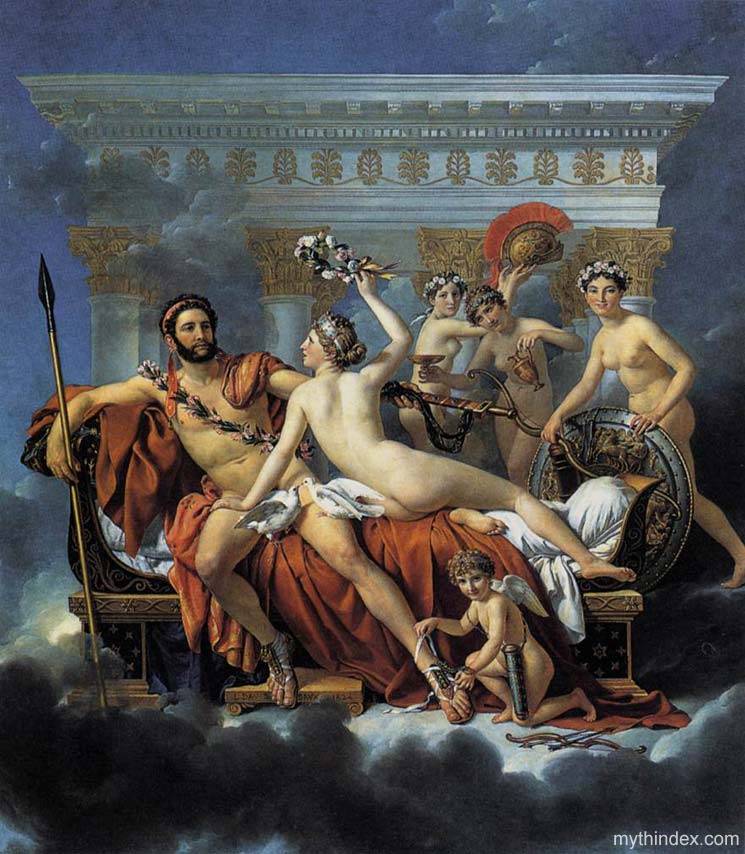 Mars disarmed by Venus and the Three Graces, by Jacques-Louis David 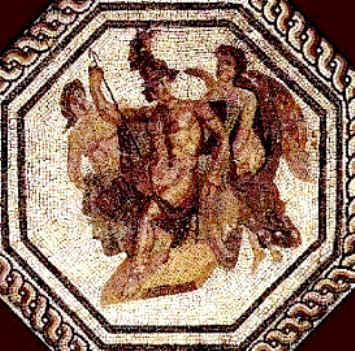 Ares-Mars represents Tuesday in a mosaic depicting the seven days of the week. He sits on a throne, armed with shield, helm and spear, and is attended by his son Phobos (Fear), and the winged goddess Nike (Victory). 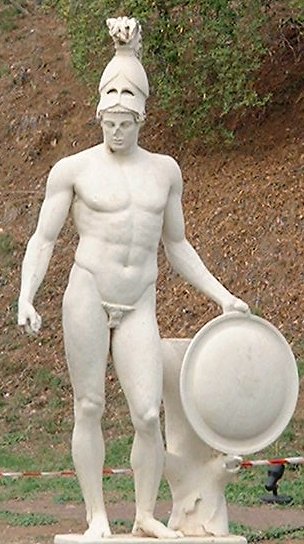 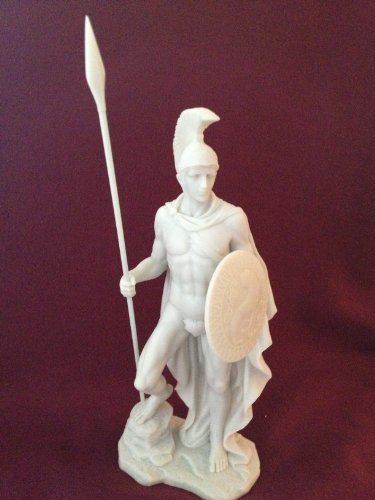 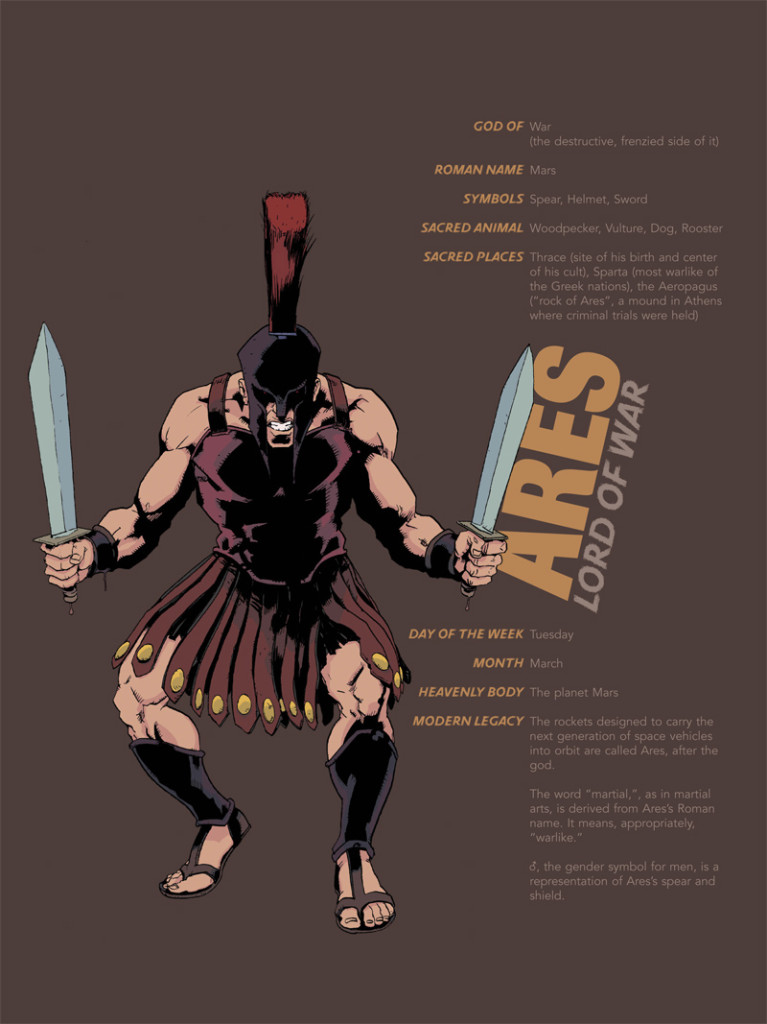 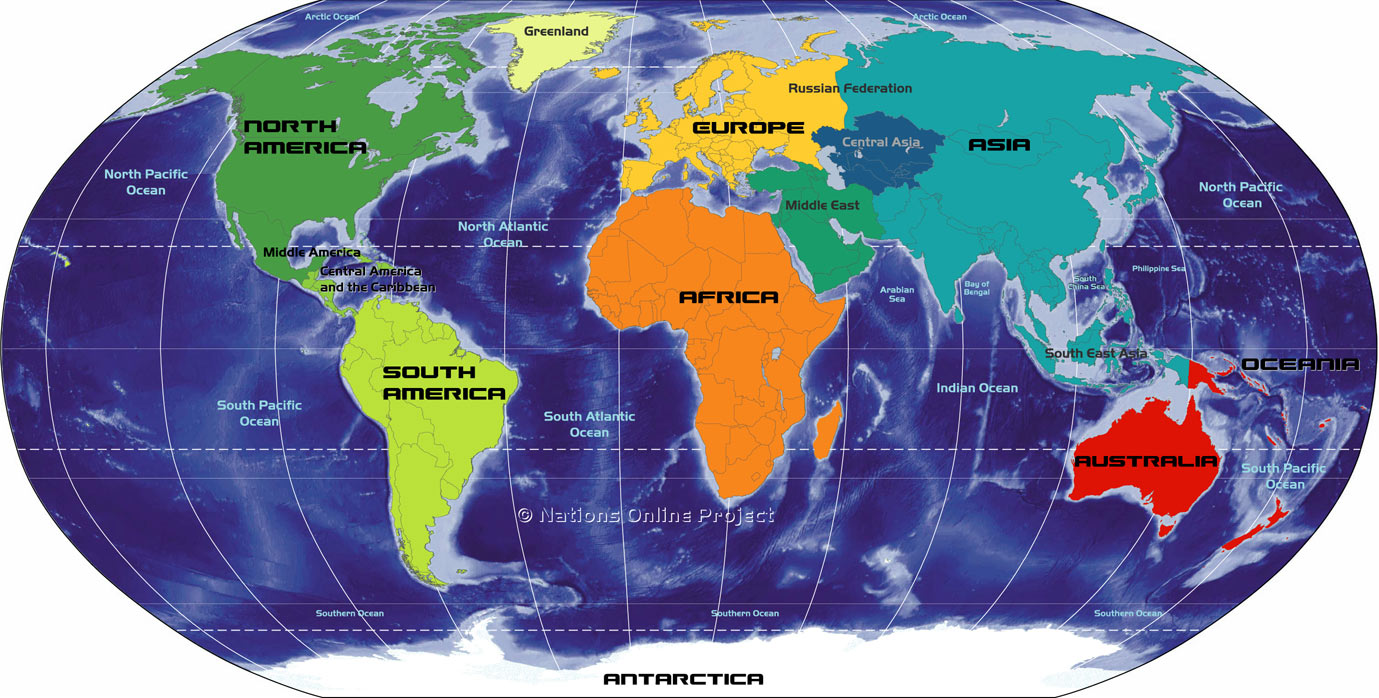 Sketch of the other half of the opening battle during the Giant War which was shown in Black and White. Ares with a spear is shown striking down Mimon who was armed with a sword. Apollo who holds a bow in one hand and a sword in the other fights Ephialtes and Hera spear in hand prepares to finish Phoitos who holds only his spear (his shield seems to have fallen). 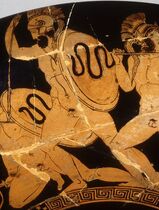 Ares with a spear is shown striking down Mimon who was armed with a sword.