Greek Mythology Wiki
Register
Don't have an account?
Sign In
Advertisement
in: Olympians, Protogenoi, Lovers of Hermes,
and 4 more
English

Born from the castrated testicles of Ouranos intermingling with sea-foam; or Zeus and Dione

Aphrodite (Greek: Ἀφροδίτη) was the goddess of love, lust, passion, desire, beauty, sex, pleasure and procreation. And just as beautiful, she is smart as wise. In most myths she was born from the foam in the waters of Paphos, on the island of Cyprus after Ouranos's genitals were cast into the sea by his son, Kronos. But in other myths she is the daughter of Thalassa (personification of the sea) and Uranus while in other she is the daughter of Dione (Titaness) and Zeus. Her Roman name is Venus.

Aphrodite, like the other gods, she patronized some characters in mythology; this protection occurred with individuals where love and beauty - Aphrodite's attributes - stood out. The forbidden love of Paris and Helen assured that the goddess of sympathy until after the end of the Trojan War; thanks to Aphrodite, Menelaus forgave Helen's betrayal and they were reconciled. One of his most famous was blessed Pygmalion, a sculptor and the King of Cyprus, who fell in love with a statue carved when trying to play the ideal woman. He had decided to live in celibacy in Cyprus for not agreeing with the libertine attitude of women there, who had given fame to the same place as courtesans. Aphrodite if pitying him and given to his request, finding the island a woman who arrived at the foot of that Pygmalion carved in beauty and modesty, turned the statue into a flesh and blood woman with whom Pygmalion married and, nine months later, she had a daughter named Paphos, which gave name to the island. In addition to its protection of lovers and passionate, the goddess protected members of his family, even distant as her granddaughter Ino, she saved him from Hera's wrath turning it into bird. Aphrodite also gave beauty to Coronides, two daughters of Orion, after the death their mother. Similarly, she took care of the orphaned daughters of Pandareus, a favorite of Demeter who was turned to stone after trying to steal bronze Zeus temple. His daughters, Cleodora and Merope, who were also motherless, were protected by Aphrodite, who took care of them and held them. However, when Aphrodite went to Zeus to ensure a happy marriage for girls, they were taken by the Furies.

Paint Aphrodite as a girl that hooks you and reels you in to a world that you always wanted to be a part of, and paint her intelligence as what we say beautiful just as much as we say her face is.

There are two forms of Aphrodite's birth. The first, and most common, is that after Ouranus was cut apart by Kronos, he threw most of Ouranos' body parts in Tartaros, though as a fail safe he also threw parts into the ocean. These divinities caused the sea foam to turn into a goddess, resulting in Aphrodite. She was clothed by the three Graces.

The second is less used. It states Aphrodite is the daughter of Zeus and Dione (Titaness).

Aphrodite somewhat began the Trojan War. It began when Aphrodite tempted Paris to choose her as the fairest goddess with Helen, the fairest mortal of all. He did choose her, which caused war with the gods. Also, because Helen was already married to a ruler of Sparta. The two fell in love, causing not only a problem, but also a war between the Trojans and Greeks

According to a version of Aphrodite's history, because of her immense beauty, Zeus feared that the other gods would begin to fight each other because of it. To avoid this, he forced her to marry Hephaestus, the blacksmith god, humorless and ugly. In another version of the story, Aphrodite marries Hephaestus after his mother, Hera, cast the Olympian, considering the very ugly and deformed to live with the gods. He enacted revenge on his mother by having a magical throne built, which trapped her. In exchange for the release, he asked to be given Aphrodite's hand in marriage. Hephaestus is happy to be married to the goddess of beauty and forged for her beautiful jewelry, including cestus, a gold belt that made her even more irresistible to men. Aphrodite's displeasure with this arranged marriage made men look for her company, most often Ares. In the tale sung by the bard in Alcino room, the sun god, Helios, once spied Ares and Aphrodite enjoying each other secretly in the hall of Hephaestus. He promptly reported the incident to the Olympic spouse of Aphrodite. Hephaestus wanted to catch the couple in flagrante, and so, he made a special, thin and strong network of diamond to catch the illicit lovers. At the appropriate time, this net was thrown, trapping Ares and Aphrodite in a passionate embrace. Hephaestus was not yet satisfied with his revenge, however – he invited the gods and goddesses of Olympus to see the unhappy couple. Some commented on the beauty of Aphrodite, others eagerly expressed their longing to trade places with Ares, but all mocked and laughed at the two. Once the couple were loosed, Ares, embarrassed, fled to his homeland, Thrace, and Aphrodite, embarrassed, fled to Cyphurs.

In the Troia destruction, Aphrodite spoke to her son Aeneas pick up his father, his wife and go to Troia. Aeneas did as his mother said, and traveled, guided by Aphrodite, with the Roman name of Venus, wandering in the Mediterranean to reach the Italian peninsula, where his descendants built Rome. This is reported in the epic poem by Virgil, Aeneid, maximum work of Latin literature. From this Roman epic, Venus (Aphrodite in Greek) is now considered the guardian goddess of Rome. One myth recounts that when Juno (Hera in Greek) tried to open the doors of Rome to an invading army, Venus sought to thwart her plans by blocking the way with water.

The most important myths of the goddess, as Ares and Adonis, revolve around the love that was the main hatred of Hera, his wife, This, when she learned that Aphrodite was pregnant by Zeus, unkindly put her hand on her stomach, making her child born deformed. This child would be the god Priapus. But other myths say Priapus is the son of Dionysus or Adonis. Other divine loves include Hephaestus, Dionysus, with whom she had a short case they "have everything in common" and with it the child Iaco, Hermes, who had Hermaphroditus, and Poseidon, with whom she was delighted and grateful because he persuaded Hephaestus to release her and Ares, as he took the two together. With Poseidon had Rhode and Herophile. [Its main consort and longest romance was Ares, being from the Iliad portrayed as his mate. They had seven children: Phobos, Deimos, Harmony and Erotes:. Eros, Anteros, Himeros and Pothos, although most myths portray Aphrodite generating Eros alone, Among her mortal lovers, the most famous was Adonis, who was regarded as his great love and with whom he had Golgos and Beroe, which gave name to the Lebanese capital. Anchises, Prince of Troy, was another famous love, and some versions of the myth say that Aphrodite fell in love with him as punishment Zeus that she had made the gods fall in love with mortal women. With Anchises took Aeneas and Liros, and soon after the birth of her children, her passion for Anquises disappeared, while continuing to protect you and your children. Among other less famous mortal loves is Phaethon, a man in Athens who has custody of his temple, whom she loved and who had Astínoo. Butes, one of the Argonauts, was saved by Aphrodite, who took him for an isolated island where they made love; Erix she had with him. There is also a Daimon, Chest, who personified the desire, a constant companion of Aphrodite, which was seen in some myths as a daughter of the goddess. However, the authors of this myth does not say who the father breast with Aphrodite.

Aphrodite is the goddess of love, beauty, pleasure, desire, grace, and sexuality. Even though she is only the goddess of love and beauty, she is one of the most powerful Olympians, because she has control over physical looks, love, and lust. She can also turn her appereance into whatever she desires.

In early Rome, she was considered a goddess of vegetation. She protected gardens and vineyards but after the Romans met the Greeks, they realized that she wasn't meant to be an agricultural goddess. While the Greeks envisaged her as the proud and vain goddess of beauty, the Romans saw her as the stern forebearer of their country.

In the Troia destruction, Aphrodite spoke to his son Aeneas pick up his father, his wife and go to Troia. Eneas did as his mother said, and traveled guided by Aphrodite with the Roman name of Venus, wandering in the Mediterranean to reach the Italian peninsula, where his descendants built Rome. This is reported in the epic poem by Virgil, Aeneid, maximum work of Latin literature. From this epic Roman, Venus came to be considered the guardian goddess of Rome. One myth recounts that when Juno (Hera Roman) tried to open the doors of Rome to an invading army, Venus sought to thwart his plans blocking the way to the water.

The Lusiads poetry of Luís Vaz de Camões writer who tells the story of Portug al presents Venus (Aphrodite) as the Portuguese patron goddess becauses Venus sees the Portuguese as heirs of the Romans loved and known to be held by them. Camões was a man of passions, which also celebrated love in his lyrical, and perhaps why he had chosen the Roman goddess that feeling for patroness of his people. It follows a riot, with the other Olympians to take advantage of Bacchus (Dionysus) and Venus, until the powerful Mars (Ares) is imposed, startling Apollo an aside (verse 37). The Venus lover and admirer of warriors made of Portuguese, remember that not only have earned they can accomplish their feat, as Jupiter had already decided to grant this favor and should not go back on the word. The king of the gods agree and closes the council.

Aphrodite is a vain goddess, proud of her looks and disdains ugliness. She is shallow, arrogant and jealous. Aphrodite is also faithless and has had relationships with many gods like Ares, Poseidon, Hermes and Dionysus. She can make anyone fall in love with anyone, even Zeus is not immune to her power. She has tremendous power over lust. She is often depicted as an incredibly beautiful young woman, in revealing clothes. Every part of her is considered perfect and beautiful. She is also seen wearing a luxurious jewelries and beautiful crown or diadem, encrusted with beautiful jewels and precious gemstones.

Gallery of Symbols and Attributes[] 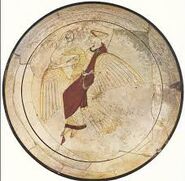 Gallery of Images of Aphrodite[]

The Birth of Venus by William-Adolphe Bouguereau (1879)

The Pearls of Aphrodite (by Herbert Draper) 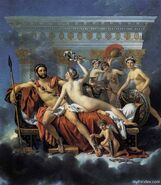 Mars disarmed by Venus and the Three Graces, by Jacques-Louis David

Aphrodite, Athena and Hera in Peter Paul Rubens' "The Judgement of Paris" (Hermes seen at Paris' side)