In Greek Mythology, Andromeda was the daughter of Kepheus and Kassiopeia, king and queen of the Phoenician kingdom of Ethiopia.

Andromeda's mother Kassiopeia, bragged that she was more beautiful than Aphrodite, the goddess of beauty. To punish the Queen for her arrogance, Zeus got Poseidon to release the Ketos Aithiopios (or Ethiopian Cetus) to ravage the coast of Ethiopia including the kingdom of the vain Queen. The desperate King consulted the Oracle of Zeus, who announced that no respite would be found until the king sacrificed his daughter Andromeda to the monster. She was bond and chained to the rocks of Jaffa.

Perseus, returning from having slain the Gorgon Medusa, found Andromeda and slew the sea monster Cetus by using Hades borrowed Helm of Darkness and Hermes's winged shoes. set her free, and married her in spite of Andromeda having been previously promised to her uncle Phineus. At the wedding a quarrel took place between the rivals, and Phineus was turned to stone by the sight of the Gorgon's head.

Andromeda followed her husband to Tiryns in Argos, and together they became the ancestors of the family of the Perseidae. Perseus and Andromeda had sons Perses, Alcaeus, Heleus, Mestor, Sthenelus, and Electryon, and two daughters, Gorgophone and Autochthe.

After her tragic death, Andromeda was placed by Athena amongst the constellations in the northern sky, near Perseus and Cassiopeia.

Andromeda's children to Perseus are known as the Perseides, "those born of Perseus". The following generations from these children are all members of the House of Perseus.[1][2] Their descendants ruled Mycenae from Electryon down to Eurystheus, after whom Atreus attained the kingdom, and would also include the great hero Heracles. According to the Roman poet Plato, Perses is the ancestor of the Persians.[3] The first generation of Perseides, are as follows: 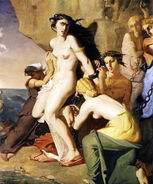 ZanPerseus.jpg
11Perseus.jpg
Perseus frees Andromeda from her chains after slaying the Aithiopian Sea Monster. Persers wears a cloak and a Phrygian cap. He holds a sword and Medusa's Head in his hand. The monster is lying dead at his feet.
Ketos23.jpg