Amphitrite (Greek: Αμφιτριτη) is the beautiful goddess of the seas, springs, aquatic life. She is the eldest daughter of Nereus and Doris (or Okeanos and Tethys). Amphitrite is the wife of Poseidon, thus making her Queen of the Seas.

With Poseidon, she is became the mother of 1 son, 3 daughters; Triton, Rhode, Kymopoleia, Benthesikyme.

The story of her courtship with Poseidon started on the island called Naxos in the Aegean Sea. She was dancing with her sisters and when the god of the sea saw her, he decided he wanted her as his wife. Unfortunately, for the love-struck Poseidon, the goddess wasn’t interested in his proposal or giving up her life as a sea virgin and she ran off to the Atlas Mountains to hide.

Being the persistent type, Poseidon summoned Delphinus, the dolphin king, to find the goddess and persuade her to marry him. The smart and gentle natured dolphin set off on the mission. After weeks of searching, he finally found her. He was such a lovely creature that Amphitrite was drawn to him and listened to his persuasion. Delphinus explained that her steadiness would balance the volatile nature of Poseidon, and that if she married him there would be harmony in the sea and joy for all. As a reward, Poseidon placed an image of Delphinus in the sky.

Once they were actually married, the sea god went back to his usual ways and had numerous affairs with other goddesses, nymphs and mortals. Although she generally had a kind nature toward the creatures of the sea, the goddess was getting increasingly annoyed and jealous due to the extracurricular activities of her husband outside of their marriage. Particularly irritating to Amphitrite was his extreme infatuation with the beautiful sea nymph, Scylla. In a fit of jealousy, she tossed magic herbs into Scylla’s bath and the nymph changed into a terrible hideous monster with twelve arms and six mouths.

Scylla spent her days living in a cave and grabbing sailors as they passed with her long arms and eating them for lunch. Amphitrite rode off on her magical seahorse into the happily ever after of the ocean.

As the goddess & queen of the seas, Amphitrite can manipulate/control water. She can calm the oceans and give protection to seafarers and seamans. Just like all her fellow gods, she can also; curse and bless anyone; can turn people into animal or object; can took form in any sizes, animals, mortals and creatures; and lastly she can fly around anywhere she wants. 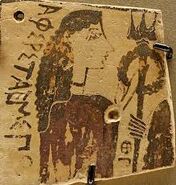 Amphitrite with her Trident 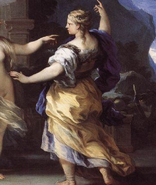 The Triumph of Neptune and Amphitrite, by Nicolas Poussin